Gendered Impact of Covid-19 on the Hospitality Industry in India

The ramifications of an occurrence such as a pandemic once seemed to be a distant possibility. But 2020 proved otherwise with the onslaught of the Covid-19 pandemic which brought the world to its feet. What followed was a hysterical storm ranging from fear of touching others to the fear of even breathing in someone’s direction. Articles and WhatsApp forwards detailing preventative measures and, more often than not, misinformation ran rampant. The Covid-19 pandemic has had shattering effects on humanity- with respect to both health and mortality- as well as on the wider socio-economic scene, one which will be felt for several years after a new normal is achieved.

In India, the outbreak of Covid-19 was initially taken in stride with no major steps being taken for the protection of the public. However, on the 24th of March, 2020, The Prime Minister of India, Narendra Modi, announced a 21 day nationwide lockdown. It was extended thrice, ultimately easing up from the 31st of May when only essential businesses were allowed to open up. All malls, factories, hotels, public transport services, and airlines were forced to shut 100% of their business operations down.

The pandemic led to lower consumption, reduced demand, supply cuts, falling prices, lower spending, and high unemployment rates. Companies were forced to put their employees on leave without complete pay or extended leave. But, many of those in the unorganized sector, especially companies related to flexible contract work, immediately fired their employees.

The impact of the lockdown devastated the economy. The first quarter of the Fiscal Year was at the forefront of the lockdown and India suffered the second worst GDP contraction in the world with the GDP contracting by 24.4% and unemployment rates soaring to 23.5% according to the World Bank.

As expected of an industry built on affability and congeniality, the hospitality industry suffered through the caution and paranoia covid brought forth. Low demand and cancellations perused receptions as travel for business and pleasure came to a standstill. Minimal hotels offering quarantine services as prescribed by the government were allowed to function but only allowed to charge a nominal amount in exchange. While this sustained them through the lockdown, most employees were still put on leave without complete pay or extended leave.

When the pandemic first hit, a large number of women in the informal sector were the first to be affected and immediately lost their jobs. The work provided by women is devalued thus companies usually lay off women first. There is an increase in the burden for women due to the pandemic women have had to take up multiple roles that they previously shared responsibility for. There is a need for protective measures in the informal sector so that women are not exploited. COVID-19 pandemic has, in fact, worsened the situation for women. Women received discriminatory treatment during the pandemic. Women constitute two-thirds of the global workforce in the health sector but there was a pay gap of 28% according to the WHO, 2019. Despite discrimination, women are working as nurses and caregivers are at the frontline fighting the deadly virus. According to a report by McKinsey, Women job loss rate was 1.8 times as much as men did due to to the pandemic. Women are disproportionately suffering from the economic and social impacts of the COVID-19 pandemic. there has been a staggering rise in domestic violence against women during the lockdown in India.
In the Hospitality Industry, Women work as cleaners, receptionists, waiters, and in many other roles. Many of these are in the informal sector. As soon as the pandemic started these women were out of jobs and stayed at home looking after their households as only women were expected to look after their homes instead of men- cleaning, cooking, and taking care of the elderly and young.

India is one of the leading aviation markets in the world. It also has the highest proportion of female commercial pilots in the world. Most flight attendants in India are women. IndiGo, the largest Indian based Airline, only hires Women as flight attendants as well. Due to airports being shut till July many women lost their jobs. Many women have not gone back to work and may never go back as they find a new role in their household, even though their financial independence goes, they much rather work in the safety of their homes. The government should ensure that Companies cannot openly discriminate against women by firing a significantly higher proportion of women. The Government can also support women by giving women on leave without pay, extended leave, or those who have been fired Stimulus Checks to ensure they can be financially stable during the pandemic. Governments can set up think tanks to see the impact of Covid-19 on women and use the data to formulate policies that will benefit women to become financially independent. If the government can promote this generation of young women to be financially independent, young women will be inspired to be self-sustaining, creating a virtuous cycle helping women everywhere. 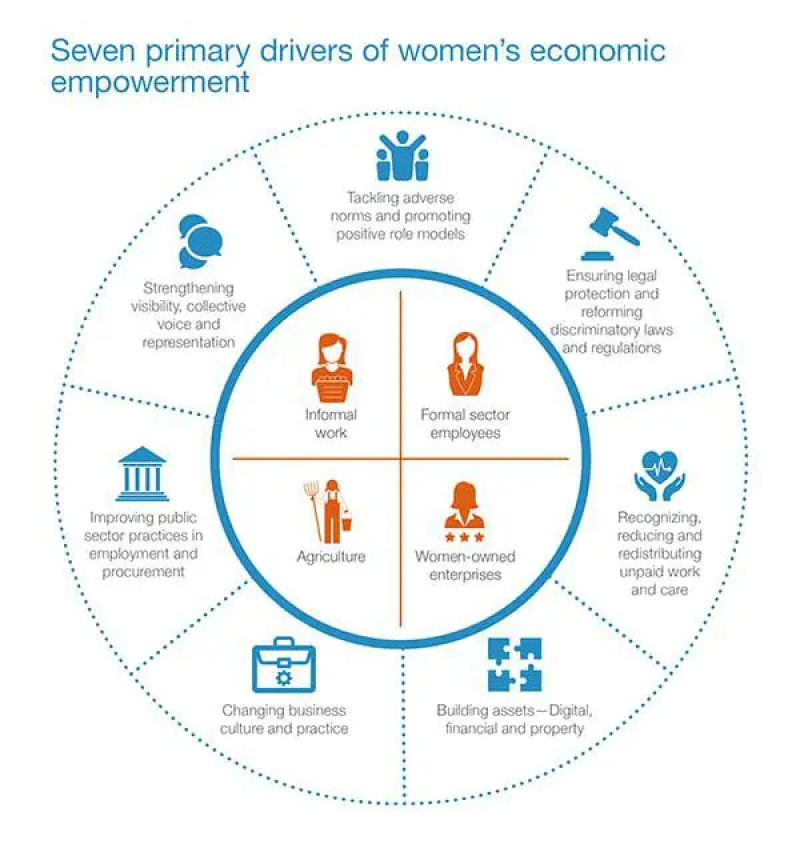