I glanced at the clock for the fourth time in under five minutes. Whenever you're in a bad situation, time always seems to slow down. It's like it's enjoying watching you suffer. And a baby's crying was the most torture I had ever endured. People who haven't dealt with a colicy infant don't know what they're missing. What with the non-stop screech, and nothing you do can calm him...it's enough to drive you absolutely insane.

Which, I guess, explained why this was my fifth time babysitting for the same family in three weeks. As Benjamin wailed and puked over my shoulder, Ava ran around the house, continuing to try and lift things ten times her size. She was relying on the "Super Strength Spell" I put on her pasta to try and get her to eat it.

"Look, I can lift the chair!" Ava exclaimed, flinching under the weight of the mahogany seat. I watched, bemused, as one leg quavered about a milimetre off the ground.

But I was too exhausted to giggle.

After exactly fourty-five minutes of constant crying, the baby was asleep. I was just about ready to fall asleep too, when I checked the clock and realized I had another three hours to go. I had finished the politics magazine I had brought...and the T.V. was not about to be turned on anytime soon (they had five remotes and I was the farthest away anbody could ever get to "technical wizard"). So the only option was computer.

I flipped open the red laptop and positioned myself comfortably on the recliner. I waited for it to boot up. My Coca-Cola was resting perfectly at my side and the baby monitor was flicked on high volume, so I could hear the steady rythm of Benjamin's breathing. Ava would occasionally bang her attachable rail, or holler, "Mommy...!"

Twenty minutes had passed. I thought I was home-free.Benjamin had never kept this quiet for this long before...

My frustration seeped through the walls and spilled onto the midnight streets. 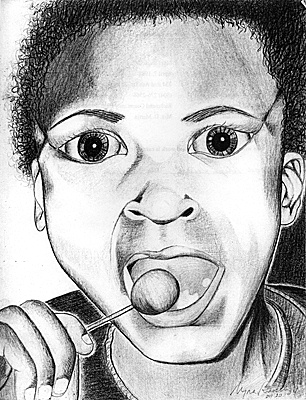 Love this one too!

OMG! I know exactly who this story is about. Love it so much! You're the greatest!