I saw you at the mall the other day. I only got aglimpse, but you made a deep impression. You're just 15 or 16and already making destructive decisions. You thought youlooked cool with that cigarette in your mouth, but you reallylooked like a loser. Nothing good comes from smoking. Smokingcan cause cancer and emphysema and other diseases you can'teven think of.

You probably think you won't ever getcancer. You won't be lying in the hospital on a respiratorbecause your lungs are too weak to breathe on their own. Youwon't have a stroke and not be able to recover because yourlungs are black from tar. It's not going to happen to you.Well, that's a lie. This could happen to you. I've alreadywatched one of my grandparents die because of smoking; now I'mwatching another.

My baci (grandma) was a chain smoker,smoking two packs a day. She had a stroke, which doctors thinkmight have been prevented, or less severe, if she hadn'tsmoked. She probably would have recovered, too, but her lungswere so weak they didn't recover like the rest of her body.She had emphysema. She couldn't talk or eat because of thetubes down her throat. Her lunch was a can of protein dumpedthrough a tube in her side. She had to have a respirator tolive. She spent five months in the hospital before they tookher off the respirator. After that she only lived a few days.It was hard for all of us, even though we knew she wasrelieved of her suffering.

Now, my pappy (grandpa) isdying of lung cancer caused by smoking tobacco. He quitsmoking cigarettes 40 years ago. FORTY YEARS AGO! He smoked apipe after that, but not often. He quit that ten years ago.Here he is, ten years later with lung cancer. Now he is athome, slipping away. He is tired all the time. He isn'tgetting enough oxygen, so he can't always think straight. Heis in a lot of pain, and we are all in a lot of pain, too.It's hard to watch someone you always looked up to who tookcare of you not be able to take care of himself. He liveseight hours away, which means I can't be with him. I probablywon't ever see him again.

If you still think it cannever happen to you, you're wrong. I hope people realize theharm smoking does. I wish never to see a young person (or anyperson for that matter) smoking again. I don't want anyoneelse to go through what my baci and pappy have, or anyone tobear the pain that we have watching them slipaway.

Author's Note: After finishing this piece, Pappypassed away. I never did get to see him again. One day he wentto sleep and never woke up. 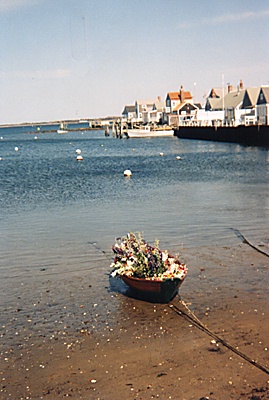 Favorite Quote:
love looks not with the eyes, but with the mind, and therefore is winged cupid painted blind. -Lysander, A Midsummer Night's Dream

View profile
you are so right. some people turn a blind eye to the consequences and shake it off thinking that that will never happen to them. my mother is quitting smoking becuase i finnally convinced her how horrible it is.