Favorite Quote:
"I'd formulated a plan. If you can define a plan as 'a loose sequence of manifestly inadequate observations and conjectures, held together by panic, indecision, and ignorance'? If so, it was a very good plan."

They were rock stars, these "Aliens". You couldn't turn on your TV without seeing them on the news, in commercials, on reality TV shows. Everyone loved the Aliens.

It felt good. America was a hero again. Saving this endanger Alien race from the brink of destruction, helping feed them, house them, adjust them to their new environment. Then it all ended.

People were outraged. Billions in government founds, tax payer dollars. "We have our own poverty! The government should be helping its own citizens! Not these- Aliens!" It was the head line on every news paper and every tabloid.

No one wants to talk about Aliens anymore. Its not polite conversation. We all know they exist, living on the streets of major cities, barely scraping by. There are no laws to protect them, its not a crime to kill them, enslave them. And that's exactly what happens.

Heroin, a thousands time more addictive to Aliens than humans, with fatal withdrawal symptoms. Its how crime lords keep their Aliens in line. Living from shot to shot, doing anything to get their next high.

In the middle of it all, a battle of political intrigue, from the remnants of a civil war that drove the Aliens from their own planet to start with. This is the final confrontation of two "Aliens", for the fate a of a race already lost. 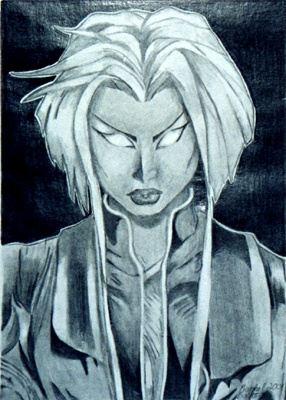 Favorite Quote:
I am the master of my fate: I am the captain of my soul.
~William Ernest Henley

Favorite Quote:
"I'd formulated a plan. If you can define a plan as 'a loose sequence of manifestly inadequate observations and conjectures, held together by panic, indecision, and ignorance'? If so, it was a very good plan."

View profile
what an incredibaly interesting idea!  very unique story and well written Could you please check out and comment on my story Manso's Shame?  I would really appreciate the feedback