The Yankees have Yankee Stadium. The Orioles have Camden Yards. The Cubs have Wrigley Field. And the Padres have ... Petco Park? The nostalgic ballparks of yesteryear - those of Babe Ruth, Ted Williams and Willie Mays - are fading into the past and being replaced by newer, fancier ones. These modern stadiums, though, can never rise to the level of the monuments of old.

Growing up in Chicago, I followed the Cubs, and I loved Wrigley Field. The ballpark was bathed in history, and one could almost hear the crack of the bat and the roar of the crowd resounding from the red brick surrounding the field, softened by the ivy creeping along the outfield wall. The aura of the park was unlike anything else. The infield dirt, the outfield grass, even the metal bleachers in center field spoke of baseball at its purest. This was my Wrigley Field.

When I moved to San Diego and began to follow the Padres, they called Jack Murphy Stadium their home. Jack Murphy helped bring the Padres to San Diego as an expansion team. It was a fitting tribute to name the stadium after him, but San Diego seemed to forget this and sold the naming rights to Qualcomm, Inc. Now, Qualcomm Stadium seemed to fit since it was a local company, but it had little meaning to those who knew the team's history.

As we look ahead to 2004, the Padres will be moving into a new stadium: San Diego Field, you think? Perhaps Tony Gwynn Park? No - enter a new era in Padres' history, where they are doomed to play in the "Litter Box." Petco Animal Supplies, Inc. bought the rights and dubbed the field Petco Park. Their $60 million has tainted baseball in San Diego.

I want to know what happened to the sanctity of the game. Baseball used to be a gentleman's game, a retreat, but no longer. Now corporate America has invaded even its hallowed ground. I dream that I will see the day when I can take my son to Wrigley Field - not some new-fangled abomination. He will not walk up to the building and see a corporate sponsor's name. Rather, he will be able to enter through the turnstiles, buy a hot dog and a soda, and watch the game. When he looks at the scoreboard, his eyes will not be assailed by beer advertisements. He will be able to witness pure baseball. That is my dream, but for now, the gentleman's game has become the money-man's game.

It is all about money, after all. And the problem is not limited to baseball. A 30-second commercial during the Super Bowl is worth $1.6 million, but the company that buys the naming rights to the stadium gets their ads cheap. It costs Qualcomm less than a million dollars per year to put their name on the stadium, but just this year, it hosted the Super Bowl. They got an advertisement every time the camera panned the stadium, or even when the announcer simply said their name. Advertisements bring customers. Customers pay money. The company wins.

Baseball also clearly has its share of money grubbers. One example: in the year after buying the naming rights to the San Francisco Giants stadium, 3Com Inc. witnessed a 50% increase in income (Cyber Journal of Sports Marketing).

But, these companies also provide vast amounts of money to keep teams alive by building new ballparks. They benefit the community too, by relieving citizens of paying extra taxes which allows families to have more money, and possibly enjoy America's pastime. A valid argument, I grant you, but there are several instances where the money from the companies was not the determining factor.

Here in San Diego, Qualcomm contributed $18 million to renovate the stadium but only a few years later, the Padres were threatening to move if they did not get an entirely new park. So the city agreed to a jointly financed project that would include the renovation of part of downtown, with the ballpark costing $125 million. With this in perspective, it would have done a great deal more good for the Padres - and the city - if Qualcomm had waited and bought the rights to the new ballpark.

On another note, I give you Coors Field, home of the Colorado Rockies. Citizens of the city and county of Denver voted for an increased sales tax to construct a new ballpark. Yet Coors stepped in, bought the naming rights to the nearly completed stadium, and renamed it Coors Field. Why? Well, cigarette and beer companies can't advertise to children, right? So Coors put their name on the stadium, where it will be seen by thousands of children each game. Which, when these children turn 21, will likely mean more money for the company.

How much staying power do these names have, anyway? In Houston, the Astros sold the rights to their new stadium to Enron, and we all know what happened to them. Well, after Enron went belly up, the Astros paid them $2.1 million and sent them packing. Minute Maid jumped in and paid $170 million. Now Houston's symbol of baseball is the Juice Box. This revolving door of sponsors cannot establish any staying power.

Only a lasting name, and a good one at that, can create a legacy. Even the lowly Cubs, time and again finishing in the cellar of their division, have a legacy in Wrigley Field. Named for the man who built the Cubs into a powerhouse, it has withstood the test of time. Even stadiums that are no longer standing have more staying power than some modern ones. Will Petco Park or Minute Maid Field ever take their place in the history books next to Ebbets Field and Candlestick Park? I doubt it. Nothing that changes with the whims of the economy can last long.

Some might say that we need change to maintain enthusiasm for the game, but I believe certain things must remain constant. We need icons. It might be argued that some ballparks have just as much potential to become legendary since it is the team, and not the name that makes the legacy, but to that I must ask: Would you prefer to remember Comiskey Park or US Cellular Field? Comiskey Park has a nice ring to it. US Cellular Field just doesn't.

In short, corporate sponsorships are ruining baseball. The game is being corrupted, driven before the whip of the economy. If we are to preserve the game that we know and love, we must stand in its path. We must not allow another national treasure to fall by the wayside, helped on its way by those interested less in the game than in profit. It is painfully clear that the only way to stop the corruption of our nation's pastime is to end corporate sponsorships. This is the only way to save the Great American Game. 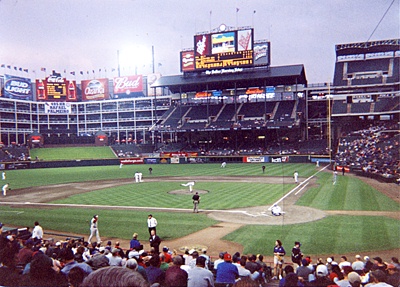