Heard it in the back streetsand the alleyways
It's the sound of all-too-familiar days
The sound of warringing in children's ears
An innocent gaze wiped off with fear
Reluctantlywe send our children off to war
So a rich man in Washington can settle ascore
Won't fight for us, but for profit
I refuse to die for ahypocrite
So I'll look that man right in the eyes
And ask why he thinksthat we should all die
So he can send a message with the shake of hishand
"With a dollar and a gun, we can own yourhomeland"

Freedom's not for free
It's bought and then it'ssold
The suits, they line their pockets
We get left out in the cold
Goslaughter men for justice
Just do it out of sight
Us kids, we got aslogan
To sit down for our rights

Blind explosions scream in thedistance
As a brave young man puts up a resistance
He says no more will heraise his gun
Not for them, Not for you, Not for anyone
As the rest fightfor right between the front lines
He looks around and hopes he doesn'tdie
But sees his friends and comrades falling down
Face first on theblood-stained ground 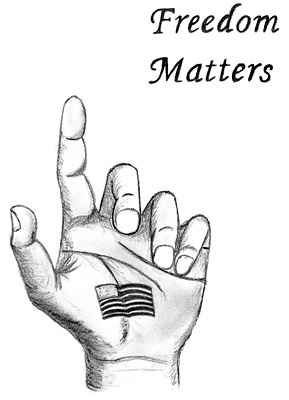