Imagine yourfamily lives in a luxurious mansion where all your needs are provided for. Thereare gardens and daily walks and all your favorite foods.

Suddenly, you'retaken from your home and shipped to a place where people come from far and wideto ogle at you, thinking they are learning about your lifestyle. Sometimes, yourcaptors force you to perform for thousands of people.

Your life haschanged drastically. Welcome to the zoo!

Although the circumstances andreasons for animals being in zoos vary, its concept has faults many don't noticeduring their visit with the animals. Animals in many zoos are kept in areas thatare much smaller than their natural habitats. As a result, animals behavedifferently than they would in their natural surroundings. Animals like big catsare accustomed to roaming territories of up to 10 square miles.

One ofthe best aspects of the zoo is its emphasis on education. Signs tell visitorsabout the animals and their behavior in the wild, but notice how the majority saythe animals were born in the zoo. Unfortunately, the adaptive behavior due tosmall cages gives visitors a skewed perception of how the animals actually behavein the wild. Although the idea of education to protect and preserve animals isexcellent, is the zoo really setting a good example of treatment or representingthe natural actions of these creatures?

Some advocates say that zoosprotect and save endangered species. Despite today's advanced breedingtechniques, animals raised in the zoo or other places of captivity are notlearning the survival techniques they would in the wild. These animals would bevery vulnerable if released and would encounter difficulties coping. Would it notbe more beneficial to raise them in their natural habitat? In this way scientistswouldn't face as many risks in reintroducing captive animals raised into thewild.

Helping endangered species in the wild gives them a better chancefor survival and reproduction. Scientists should only revert to the zoo if thenecessary funding or habitat for breeding is not available.

Animals arenot just brought to the zoo to protect their species, but also to provideentertainment. Many animals' lives will include performing for visitors. Fourshows are performed every day at the San Diego Zoo. The zoo should be reservedfor education and protecting endangered species, not an amusement park whereanimals are trained to perform.

Although the zoo is trying to behelpful in providing shows about the animals, it is harming those it intends toprotect. The zoo has good intentions in its educational purposes, and in breedingendangered species, but animals shouldn't perform or be treated in a manner thatcould change their behaviors from how they act in the wild.

Though zoosare meant to be a joy to viewers and teach lessons about our earth, the zoo jailsits inhabitants and passes on faulty knowledge. The wild animals in our world area wonder, and they must be preserved. At the zoo they are treated with care, butthey should be treated with reverence.

Next time you visit a zoo, look atthe enclosure of the tigers and watch the seals balance a ball on their noses,and then think about what you are really learning from your day at the zoo. 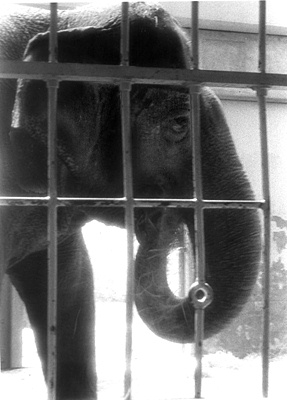