Not Everyone Grooves to the Same Beat | Teen Ink

Not Everyone Grooves to the Same Beat MAG

A while ago I happened to be pondering our society,namely who was to blame for the nation's stereotypical views regarding teenagers,when all of a sudden a light bulb went on.

Well, let me start from thebeginning. I was leafing through another one of those random clothing catalogswhen it all began to take shape. By "it," of course, I mean everythingthat normally occupies a teenager's mind: the future, boys/girls, familyexpectations, clothes, friends, homework, identity ... you know what I'm talkingabout. Pretty much everything that fits into a teen's mind somewhere between thelocker-room hype and whether or not the blue capris will match the newsunglasses. Wait. I'm not being totally fair, let me rephrase that. Everythingthat fits into the mind of America's Teen Cliché. When we think"teen" these days, we think (in a girl's case) half-outfits, six-inchheels, burnt/bleached/tortured straw-like hair styled at 5 a.m., layers of goosomewhere between globs of glitter, plastic nails, glass-shattering giggles andone of those oh-I-can't-stand-you-but-I'm-trying-to-act-nice type smilesplastered on her face.

For all the Kens out there, the assumption (aswith all other things) is simpler: Abercrombie caps torn at the seams, spiked,dyed, gooed, untamed hair (or at least poofing to Mars), a 20-pack stomach, and anew Barbie booked for each night.

But are we being realistic? Let's faceit - not every girl owns a pair of shoes for each day of the week, and not everyguy drools over the cute girl next door. Come on, tell me it's not frightening tothink that teenage girls idolize Britney Spears.

Which is where my firsttheory comes in: Media. With a capital M. For anyone who can show me more thantwo magazines with girls modeling jeans over size two and guys using words withmore than two syllables, I shall declare my theories wrong. But until then, Idemand the podium. Not only does every television series feature beautiful girlsacting like dimwits tripping over their own feet while discussing what"oh-my-God-like-look-at-her" is wearing, but it has forced us to acceptit! Now, guys, on the other hand, have more of a range in the media's image: somehave blue stripes on their American Eagle sweaters and some have red. And anyoneon the shows who actually doesn't have a cell phone or is reading a book (abook!) is considered an outcast. Front page news, people: Some of us read becausewe actually want to! And just because we don't go clubbing on Friday nightsdoesn't make us socially impaired, it just means we'd rather not. Not everyonegrooves to the same beat, you know.

My second theory: Peers. I'm sureyou've all heard the word in your D.A.R.E. class, but believe it or not, theymake a huge difference. I'm also certain that many of you out there, myselfincluded, have done or said something, perhaps dressed in a certain way, andwondered if someone else would accept it. I'm sure you've all seen the"look-at-her-what-a-loser" glances shot by that ignorant group standingby the lockers and scrutinizing passersby.

I know we've all been downthat road, striving to fit in with the "norm," hoping that Sally orKevin will like us, praying that the locker group won't whisper and laugh as wepass them. Most of us have probably felt the need to be accepted in some way oranother, probably siliconing ourselves in the process.

What bothers me isthat once you become a link, it's hard to break away. Your friends aren't livingyour life, you are. It shouldn't matter what anyone thinks, as long as you areyou. Walk proud, and let your true self shine. After all, we are the future ofAmerica!

Maybe I don't know exactly who to blame for the clichés,but I do know this: we are part of the creation. Our true identities have beenmasked by the fear of not fitting in. To fit in may mean giving up what youbelieve in, or changing your values for the worse to coincide with those ofsociety. The sad truth is that if we don't come out and declare "This is me,and that's that," we may forever be trapped in the cycle.

Don't letit happen to you. Don't let yourself be stripped of your integrity orself-respect. Be an individual. Be strong. Stand out. And the best advice I cangive you is to always do what's right. With that, you can't lose. It is whatmakes the true difference. As for me, well, I'm proud to say that I'll be livingout my family's most dreaded fear, educating the future of America and yet stillsomehow being eligible for food stamps. 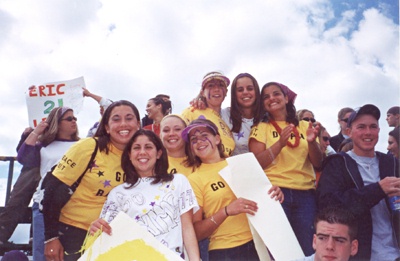