GM Foods: How Much Do You Know? | Teen Ink

GM Foods: How Much Do You Know?

Throughout the years the human population has only increased. Genetically modified food is one way scientists believe will keep us with a steady food supply in the future. The genetically modified food also has other qualities over traditional farming. For example, GM foods are immune to: crop losses, pesticides and disease. Among other factors to GM foods is tolerance to drought and salinity.
You might be wondering what exactly GM food is and what’s the catch?
Genetically modifying food involves altering an organism’s genes by inserting a gene from another, simple right?
Since the beginning of time, farmers have lost food and money with unfruitful crops. Contaminations that can be avoided by GM are herbicides added to crops to eliminate weeds. Not only are these chemicals ending up in your food but also it is time consuming and wasteful.
Plants are living things and therefore vulnerable to their own diseases like us, except they cannot buy cough syrup. Biologists specialized in genetic engineering work around the clock to build the resistance for vegetables and fruits. Similar to our DNA, GM food have genes. Suppose a genetically modified vegetable was going to be kept in a cold climate, it would be given a natural antifreeze gene from fish. Do not worry though it shouldn’t alter the taste of your veggies and fruits.
Now, imagine the benefits to the underprivileged if GM foods were readily available to them! GM food is the next step to helping impoverished countries that have inadequate food sources. The limitation in food leads to malnutrition and diseases from lack of vitamins. Starvation should not be an option in 2010. GM foods could result in a revolution to end some suffering in the world.
However, there is still a lot of work needed towards research and funding. To make genetic modification successful it must be pursued completely: learning how to prevent side effects and a realistic way to apply it to the world.
Educate yourself on genetically modified foods and get involved, no matter your opinion. 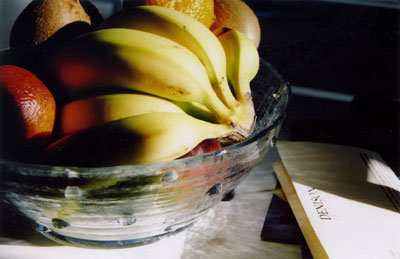 The author's comments:
Everyone should seek alternatives. Become passionate about something, whether it's GM foods or a hobby.

Favorite Quote:
" BE THE CHANGE YOUR WISH TO SEE IN THE WORLD!"

View profile
I agree.  Maybe GM's will end up solving world hunger--who knows?
Paola C. said...
on Jul. 29 2010 at 8:30 pm
Thank you for your comment! I think that case is horrible, as anything with industries there are always greedy people looking out for themselves. I think GM foods in the right hands would be positive overall.
inksplatters21 SILVER said...
on Jul. 29 2010 at 6:08 pm
inksplatters21 SILVER, Mason, Ohio
6 articles 0 photos 84 comments

View profile
Good writing, but I disagree with your opinion on the matter.  Watch Food Inc.  Genetically modified soy beans' genes have been bought by the company that "owns" the gene.  Farmers who do not purchase this new GM soy bean have been prosecuted.