A Recession of Music | Teen Ink

A Recession of Music

Recently the world has been involved in an economic recession. But not only are we in an economic recession, we're in a musical one as well. For the past decade I've noticed music has lost quite a bit of its quality. Talented musicians, composers, and lyricists are diminishing completely as bubble gum pop music, rap, and screamo/alternative takes control. Bands like the the Jonas Brothers or Fall Out Boy are increasing in popularity and yet they truthfully lack any amount of talent. These bands use software known as auto tune to make their voices sound whiny and clear, just the way they like them. In other words their cheating, something that was impossible in the days of classic rock. Second of all quite honestly they aren't talented musicians. There used to be musicians that would release a song that would contain such brilliant music one would ask "how in the world did they do that", this is becomingly less and less common. Lastly, lyrics are becoming garbage. Music is a way to express yourself, the actually instruments help set the mood, the energy, the setting. But the lyrics deliver the message. Music is about protesting injustice, speaking out against the corruption of society, and expressing love and peace. And primarily, its about telling a story. Its also about inspiring people. But you find that all bands sing about is how much they're in love with some girl or boy and how sad they are. Also two more quick points I want to address are rap and screamo. Rap takes no talent and the lyrics are crude and thoughtless, and music which contains screaming is simply a joke. (once again no talent) Music needs to be saved and this recession needs to end. I find that the only way to get good quality modern music is through Indy rock bands. Indy rock is short for Independent which basically means they aren't mainstream (haven't sold out). These bands often experiment with different ideas and instruments. For some good bands with meaningful lyrics and great musicians check out Arcade Fire, (wake up) MGMT (kids) The Beatles (All you Need is Love) John Lennon (Imagine) Bob Dylan (like a Rolling Stone) Arctic Monkeys (When the Sun Goes Down) and John Mayer (He is one of the few modern, mainstream artists who has real talent) among many others. Save Music!! 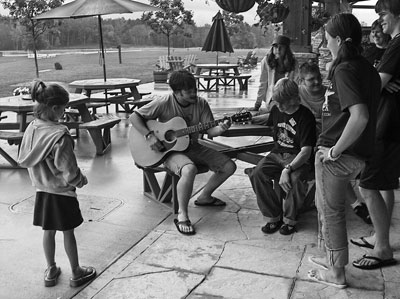 Favorite Quote:
"Let X equal the quantity of all quantities of X. Let X equal the cold. It is cold in December. The months of cold equal November through February. There are four months of cold, and four of heat, leaving four months of indeterminate temperature. In February it snows. In March the Lake is a lake of ice. In September the students come back and the bookstores are full. Let X equal the month of full bookstores. The number of books approaches infinity as the number of months of cold approaches four. I will never be as cold now as I will in the future. The future of cold is infinite. The future of heat is the future of cold. The bookstores are infinite and so are never full except in September...” -Proof, David Auburn

I completely agree with everything you said, thanks for your well written and thouhtful response.

View profile
I apologize, I'm sorry I didn't explain myself too well. When I say Auto Tune I don't refer to the generally rap based Auto Tune which both tunes and distorts the voice, I'm referring to Auto Pitch which is similar, but doesn't distort the voice but simply makes the pitch perfect and cleans up any mistakes the singer may have made.
E.A.Costa BRONZE said...
on May. 19 2010 at 5:01 pm
E.A.Costa BRONZE, Cary, North Carolina
2 articles 0 photos 23 comments

View profile
CJMurph, It elates me to know that you completely understand my opinion, and that your's is practically identical to mine. Everything you say is the utter truth. I wish there were more people like you. Hopefully others will be enlightened and come to the same conclusion we have. I especially agree with your remarks about fame and money. Music isn't about fame, money and everything that comes along with it. It's about the music! Great musicians that I've mentioned obviously wanted to make it big (The Beatles, Arctic Monkeys, Pink Floyd, Led Zeppelin) but it wasn't so they could get money, it was so millions of people would listen to the messages conveyed in their music. But at the moment, all that really matters for people is the publicity. It quite blatantly sickens me. Please people, don't endorse bands with an obviously apparent lack of talent, don't listen to music just because your friends do, or because it's popular. Listen to music that's real, music that inspires you, that kindles emotions within you. For this is really the true purpose, the true meaning of music.
CJMurph713 said...
on May. 17 2010 at 12:56 pm
I completely agree. I actually want to become a professional music producer/ engineer so i can help form a record label that actually cares about originality, meaning, and talent. The major cause, i think, of all of this horrible music is that with today's digital recording it is extremely easy to fix any little imperfections that a song may have and auto tune everything so it sounds "perfect". Popular musicians today are getting really lazy and greedy. I listen to albums like "Dark Side of the Moon" by Pink Floyd, recorded in 1973, and even though i've listened to it hundreds of times, i am still amazed at the level of ingenuity it took to record it. That album had lyrics that meant something because they were about the corruption of corporations and how people are really all the same and we need to unite. The talent level in that band and on the album is insane because what you hear is exactly how they played it because it was recorded on analog tape and there was no possible way to alter any imperfection that the recordings had. And on top of the primitive technology they had, they wanted to constantly find new ways to use the equiptment so that their sound would be like no one elses sound. All the bands in the classic rock era of the 60's/70's recorded like that so their music was real. Bands back then strove for originality and passion while bands today strive for money and fame. I think with all of the technological advances we have today artists would use it to its complete, and beyond, potential to invent new forms of music and sound; but sadly they have abused it and now we are in a deep musical recession because today's definition of music is not passion and ingenuity, it is money and fame :( Both recessions can be blamed on greed, people wanted to buy things they couldn't afford and defaulted which sent the country into the recession, and musicians wanted to make money fast and easy. What a tradgedy. Great Article, i'm glad that there are people who still care about the welfare of music!!
E.A.Costa BRONZE said...
on May. 5 2010 at 5:42 pm
E.A.Costa BRONZE, Cary, North Carolina
2 articles 0 photos 23 comments

View profile
Fall Out Boy I suppose doesn't totally rely on auto-tune, but you can tell that the vocals have been modified by some software. And I'm going to have to politely disagree with the statement that they sound nearly the same live as they do recorded. If you listen to Sugar We're Going Down live, it sounds rather disgusting. But that is after all, my biased opinion and I completely and utterly respect your.
riosomeone BRONZE said...
on May. 3 2010 at 9:04 pm
riosomeone BRONZE, Dallas, Texas
1 article 0 photos 2 comments

Favorite Quote:
"We can't keep thinking we're all that matter, and that the world has nothing to do with us." -Edward Elric (FMA)

This is pretty well-written. Although I don't agree with some of what you say, I know that music isn't really what it was.

However, I do disapprove of the grouping of Fall Out Boy as one of the bands that relies on Autotune. To my knowledge, the only notable instance of that software is on Infinity on High, when producer Babyface used it for special effects. I'd say their live vocals don't sound much different from the CDs.

View profile
I felt that this was a very well written and true article. The only thing I would like to point out is that some of the "screamo" music do have talented guitarists. My brother listens to metal, and I have heard some really impressive guitar solos. Other than that, you are soooo rights.

And, btw, JOHN LENNON AND THE BEATLES FOREVER!!! :D