A few months ago I was on the bus listening to my music like usual when something
unexpected happened. One of my earbuds fell out and the boy next to me asked to hear what I was listening to. I shrugged and said it was fine but not 5 seconds later the kid (whom I had never met before) yanked my headphones out of his ear(breaking them while at it) and exclaimed "please repent because if you continue on the path you are on now then you shall certainly know eternal torment". I was shocked. Being a devout Christian (Mennonite/pacifist) I told him politely that I personally didn't believe in hell. The next day I saw the boy again. We made eye contact and he hurried along trying to avoid me. I was quite disturbed with what the boy had said earlier though. I didn't mind that he practically told the whole bus that he thought I was going to hell. I get that a lot. What shocked me was that he did not wait a heartbeat to judge me based on my music taste.


The song that I was listening to was "second and Sebring" by "of mice and men". The song is about how the main vocalist, Austin Carlile's mother died when he was a child, and through his depression and mourning he found the inspiration to create music and help save lives through his lyrics. If the boy had waited to understand the meaning of the lyrics he would have seen that it was a truly beautiful song. But since it contained heavy guitar riffs and screaming it must have been satanic. How quickly the boy was to judge and deem my music, was like a huge wake up call telling me to realize that most of the world is like this when it comes to diversity in general. It is a dilemma in today's society that needs to be addressed.

Hip/hop= a gangster who's never going to graduate high school
Metal = a punk with crazy hair who has anti social and a destructive personality
Rock= apparently influences teens to do drugs and alcohol
Pop = teaches hormonal teenagers to have sex at an early age because all the pop stars did.


These and many more are stereotypes that people associate with the genres. Although some are true for each case, it is usually from the listeners own choice and was not influenced by listening to certain types of music.


With this I hope you go out into the world, and not just give music a second chance, but human beings in general. We are creatures of love. 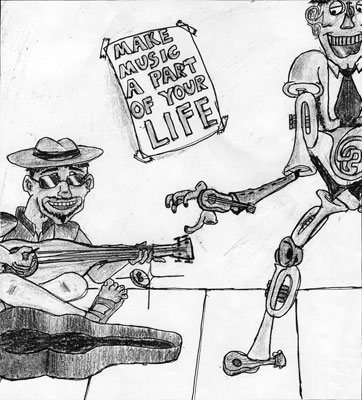 The author's comments:
What does it tell you about ourselves when our society is so quick to judge someone by something as simple as music
Post a comment
Submit your own

Favorite Quote:
"Don't let the fear of striking out keep you from playing the game."

View profile
Opinion
Back to the Classics
By Anonymous

View profile
This is a good article, and I like how you added an anecdote. What you said about not judging people based on the type of music they liked is true, but I also think that it is reasonable to judge someone if their music has a lot of swear words in it, or is totally inapropriate
Pigasus said...
on Jan. 20 2014 at 10:48 pm
Pigasus, San Jose, California
0 articles 0 photos 13 comments

View profile
This is a good article, and it was well written. I can imagine someone saying that you(not you, you, but anyone)would go to hell because of the music they hear, and that is a pretty extreme reaction, but I don't think that he meant it. I can see what you're saying about the steriotypes. I think that sometimes they can be true, but to a smaller extent. However, it is true that we should not judge people because of the msic they like.