May 1st has come and gone. Deposits to colleges are in and seniors can finally relax. Well, sort of.
Getting into college is one thing, but paying for it is quite another.
I attend a predominately Hispanic and African American public school in the northwest side of the city of Chicago. I was blessed to have been awarded a four year Questbridge scholarship to the University of Chicago. However, some of my classmates were not as lucky.
Throughout the course of the year, I have witnessed the stress that many of my friends and peers have gone through because of high college tuition. Several of my friends were offered admission to great universities, such as the University of Wisconsin, Colorado College, Vanderbilt, Marquette, etc. Admissions packets often accompanied disappointing financial aid packets.
It demoralized some friends to realize that they worked for four years and gained acceptance into a great college, but can’t attend because of high tuition costs. If they choose to attend, debt awaits their pockets. Some have ended up at colleges where they simply didn’t envision themselves after high school because of costs. Perhaps the lack of an appropriate college choice has something to do with the 1 in 3 likelihood that college students will transfer during college, indicated by the nytimes.com.
This is not simply a regional issue, though.
Colleges all across the country are raising their tuition costs. According to cbsnews.com, Florida college students could face yearly 15 percent tuition increases for years. University of Illinois students will pay at least 9 percent more. In addition, the University of Washington will charge 14 percent more at its flagship.
California has become the poster child for college tuition hikes, as California state schools have increased by 30 percent. The move has sparked protests reminiscent of those in the 1960s.
Higher college tuition is nothing new, though. The major difference is the speed on which it has been rising at some colleges.
From 1928 to 1948, college tuition at Harvard was $455, which translates to about $5000 adjusted to today’s inflation, according to studentreport.org. Over the years, the tuition price continued to grow, eventually reaching its cost of over $50,000 per year.
There are various reasons that college tuition continue to skyrocket. One of the reasons is the state of the economy. State schools receive significant funding from the state government. When some states, such as Illinois, are facing huge budget deficits, it is difficult to keep tuition low.
In addition, various colleges feel the need to attract more competitive applicants by providing them with various amenities. Boston University recently opened its new recreation center, equipped with a rock climbing wall and various Olympic style swimming pools, according to bu.edu. Rutgers University even installed a 7/11 in its recreation center. With high tuition costs, do students necessarily need all these extra luxuries?
As tuition continues to rise, college enrollment continues to increase. This is a huge problem and the Obama administration is trying to address it. A few weeks ago, Obama addressed colleges and requested that colleges reconsider raising tuition and put “affordability front and center as they chart a path forward.” Arne Duncan, secretary of education, recently signed a law that increases the Pell Grant funds and limits the role of private lenders.
College is an important part to the development of any young man and woman. Making college accessible has to be a main priority to the nation. I can only hope that my friends and peers will be happy with their college decisions despite high costs and debts. 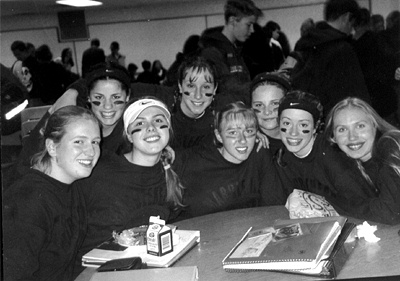 The author's comments:
I attend a predominately Hispanic and African American school and I feel the need to address the issues that my low income peers are facing.
Post a comment
Submit your own

Favorite Quote:
Love is giving someone the chance to destroy you and trusting them not to.