It has become clear over the last few years that our economy is in bad shape, and that its effects reach past Wall Street, directly to the American people. Across the country, people are devising ways to cut back on spending. Some who previously lived comfortably are struggling to make it to the end of a month. Other families are ­cutting back to one car, taking cheaper vacations close to home, and eating out less often. But only a few are making an ­effort to donate to, and shop at secondhand stores – a choice that can really make a difference in our communities, and our world.

People still purchase clothing at the mall, even as prices grow increasingly high. Often a person's self-image is based on his or her clothing, and many devote a significant amount of money to this each year. As of 2007, the average American family spent $1,760 per year on clothes. Taking inflation into account, this number is sure to have increased, and will continue to do so.

Beyond the obvious cost factor, shopping for used clothes helps reduce textile waste, which adds considerably to the ­contents of landfills. The Council for Textile ­Recycling estimates that used clothing stores have saved 2.5 billion pounds of discarded clothes from being dumped into landfills. Still, that 2.5 billion pounds is only 15 percent of clothing waste. We customarily recycle paper, cans, and bottles. Why not take this practice a step further by recycling used clothes?

Purchasing used clothing also benefits the community by supporting the charities that operate these secondhand stores. These include Goodwill, which works to provide employment opportunities, and Discovery Shops, which support the American Cancer Society. Donating clothes to these stores can also be a great way of reducing waste and supporting charity, too.

When it comes to purchasing clothes at secondhand stores, the economic benefits are clear. But many people make a direct connection between the quality and price of clothing. If a shirt fits, looks good, and lasts a long time, then it was probably more expensive. However, ugly styles or poorly made items aren't what's keeping people from purchasing more economical used clothes. Instead, it is snobbery and pride. Of course, many may simply not have thought of buying secondhand.

I have personally ­experienced the attitude toward secondhand clothing in my own ­middle-class, California neighborhood. I have been complimented on a shirt, and when asked where I purchased it, receive puzzled or even disdainful looks when I answer Goodwill. Contrary to what many believe, used clothing stores carry many current styles, as well as interesting retro pieces. Though I personally prefer an eclectic look, I have friends with a more mainstream taste who always find something they like at a secondhand store. This makes sense for teens and children who outgrow clothes long before they wear out; spending lots of money on clothing simply doesn't make sense. There are always exceptions, when shopping at conventional stores may be necessary, but the vast majority of clothing is readily available secondhand.

Since I have begun to shop at secondhand shops, I have noticed that the typical customer is no longer in need, but rather families who have been ­affected by the economy. Though the reason behind this change is unfortunate, the result can be positive. Once people see beyond the stigma attached to thrift stores, they can begin to appreciate the many benefits of shopping environmentally and ecologically smart. 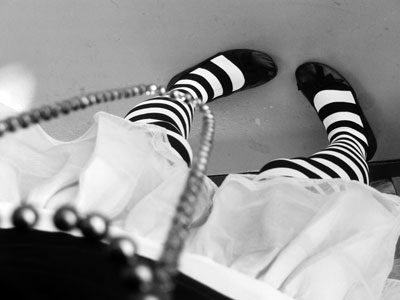 Favorite Quote:
"If You Don't Fight Back, You've Already Lost."
"Don't suppress Laughter, it goes to your thighs."

View profile
This is a straight on article! And you know, there are some adorable things at 2nd hand clothing stores!
coinkedink BRONZE said...
on Jul. 16 2010 at 9:42 pm
coinkedink BRONZE, San Marcos, California
2 articles 14 photos 35 comments
View profile
ya, i loved this article! i totally don't see what's so wrong with shopping at second hand stores i i love plato's closet! my friends has a really wierd taste in clothes and she gets allher clothes at thrift stores and they are really cool. this article was really well written and convincing!
J. Rae said...
on Jul. 16 2010 at 10:20 am
Yeah, and it's a chain so you might even find one close to you! I don't know how many there are, but try using google to find out.
ellepineapple BRONZE said...
on Jul. 16 2010 at 5:35 am
ellepineapple BRONZE, San Francisco, California
3 articles 8 photos 5 comments

Favorite Quote:
"The greatest pleasure in life is doing what people say you can not do"

View profile
omg really????
Maddies said...
on Jul. 11 2010 at 3:42 pm
i love getting cheap clothing as much as the next lower-middle class kid does, and i read this article and it reminded me of my friendly neighborhood Good Will! now i have practicaly a new waurdrobe thanks to this article!! [and i have not forgotten to donote any clothes i don't use as much] thank you!!
serena said...
on May. 30 2010 at 4:21 pm

me and my friends love thrift stores, and once a year all the ladies in our church go to columbus, Ohio (an hour away from our church) in order to go thrift store shopping. I got a wonderful shirt at a thrift store and ended up giving it to my bff because she just loved it! :) (and it fit her better than it fit me!) just the other day i got two new jacket/shirts at a friend's yard sale for only $1 each and they are my favorites!

buying second hand is environmentally friendly, gives back to the community, and is a cheap way to get anything you want! You can get something stylish for under $5 sometimes-- I know!

J. Rae said...
on May. 30 2010 at 8:29 am
Platos Closet is a great second hand store. It resells all of the expensive brands like Holister for around three bucks a shirt. My friend got a brand new Holister shirt with the tags still on it for four bucks! It's a great place for people who don't want to pay fifty bucks for a T-shirt.
Kmiskiv BRONZE said...
on May. 27 2010 at 10:22 pm
Kmiskiv BRONZE, Boise, Idaho
1 article 0 photos 2 comments

Favorite Quote:
"When the world says give up, hope whispers one more try."

View profile
This is a great article! I know my family donates our used clothes to thrift stores/charity, but I don't think I've actually shopped at one. I'll have to give it a try!
curlikap18 BRONZE said...
on May. 27 2010 at 9:31 pm
curlikap18 BRONZE, Newark, Delaware
2 articles 0 photos 14 comments
View profile
I completely agree! I am guilty of being one of those people who does still shop at the mall, but lately we ahve been seeing more consignment shops opening, and we have been taking the oppertunity to go there and get clothes. Personally they fell no different, and i still get compliments. When people ask me where I had got my shirt or my jeans and I tell them a consignmetn shop they look at with a face, maybe because they dont even know what one is. I recently went to goodwill to get some really ugly dated clothes for a project I was working on which was fashion through the 50's and 60's. Sure they had those clothes but they had some really nice clothes too! I got a pair of Victoria Secret pants for $3.50, when online they would have been well over $60! AND they were in mint condition, and they fit, please... I could come up with $3.50 in spare change I find on the ground! It was amazing. I am with you, and I cant wait to grow out of my clothes just so I can go to goodwill and get some more!