You Don't Look Like a Pineapple to Me... | Teen Ink

Let’s talk about food.  It’s pretty important.  We are what we eat, after all.  A lot of people want to be careful about what they put in their bodies.  The top foods people avoid, however, may not be so dangerous.  Someday I might tell you how I feel about low-carb diets and the gluten-free craze, but today we are looking at something much nearer my own heart: genetically modified foods.  If you’ve known me longer than a month, you already know where I stand, but right here I am putting it all on the record.  First things first: time to bust some myths.

Myth #1: We should be afraid of genetically engineered crops because they are new.  People who are asking this question seem to think of genetically modified, or GM, plants as a completely novel, Little-Shop-of-Horrors-monstrous species we created by feeding a houseplant human blood (4).  I think of GM crops in terms of the tomatoes growing in my garden or the cows at my favorite creamery.  Any plant or animal used in agriculture, such as corn, is modified from its wild, ancestral stock.  In the case of corn, a prime example, the ancestral plant was teosinte, a small wild grass that produces tiny, stony, scarcely edible grains (6).  Almost everything you have ever eaten is genetically modified in this way.  GM used to be possible only through selective breeding, or artificial selection (3); now we use more modern technology to achieve the same ends.  The concept is nothing new.  It’s just another innovation in the history of agriculture.

Myth #2: Genetically modified crops cause cancer and allergies.  One French study in 2012 published results saying that rats fed a diet of GM grain had a high rate of cancer (3).  The media had a field day with that headline, but they were more interested in the fear factor than in the science.  Those results have never been replicated, and the study was deemed unreliable in peer reviews for several reasons, including the variety of rat used, which is prone to developing tumors in response to a common corn fungus (3).  Similarly, there was a situation in which soybeans engineered with a Brazil nut gene proved allergenic, creating a media buzz (3).  This time, it was a verified event, not a dubious experiment.  So, yes, it is possible for transgenes to make allergenic proteins in new plants.  That is a reasonable concern.  However, what most people don’t realize is that GM crops are required to undergo extensive allergy testing for this very reason (2).  Scientists know the risk and a safety net has put in place.  The Brazil nut soybeans in question did not pass this testing and were never brought to market (3).

Myth #3: Transgenes are unsafe to eat.  If you are one of those people who thinks that eating GM plants will somehow cause you to incorporate those transgenes and make you have children of the corn, then a) your concept of biology concerns me and b) you wilt my soul.  As a plant genetics major and a lifelong student of biology, I assure you that you absolutely cannot absorb DNA from food into your own genome.  Enzymes and mechanical digestion start breaking down DNA in your food as soon as you put it in your mouth (2).  If you don’t believe me, consider this: unless you are the rock monster from Star Trek, almost everything you eat contains DNA (2).  Are you turning into a pineapple?  No?  A carrot, perhaps?  If not, then don’t worry about inheriting anything from genetically modified foods.  If you are becoming a carrot, please seek help.  That is most assuredly not normal, and it didn’t come from eating GM crops.

With the patently ridiculous out of the way, we need to consider the more valid concerns.  I won’t deny that there are some.  Will anti-pest or herbicide-resistant crops lead to resistant insects and weeds?  It is certainly possible.  We have seen that happen with chemical pesticides, and there are indications that cotton bollworms have already evolved resistance to the Bt cotton designed to control their populations (7).  Resistance seems to be occurring more slowly than it has with chemical pesticides, but I concede that it does occur.  Another question: is it dangerous that this gene technology is concentrated in the hands of a few large, shady corporations (5)?  I think the answer to that is a resounding “yes.”  But you have to consider the benefits of genetic engineering in agriculture as well.

“You people in the developed world are certainly free to debate the merits of genetically modified foods, but can we please eat first?” asks Kenyan biologist Florence Wambugu2.  She brings up a whole world of important points.  One of the most well-known GM crops is Golden Rice, a breed of rice engineered to produce high levels of Vitamin A in an effort to reduce the rampant deficiency in poor countries.  Unfortunately, it has scarcely left the lab, largely due to irrational fear of GMOs.  Virus-resistance genetic engineering rescued the American papaya industry from Papaya Ringspot Virus in the 1990s (2).  Ask a papaya farmer or a child blinded by Vitamin A deficiency how they feel about the issue.

One estimate says that biotechnology has helped farmers around the world grow 311.8 million tons more food on mostly the same land in the past 15 years (1).  We desperately need to curb population growth, but in the meantime it can’t be ethical to let everyone starve—we have to grow enough food somehow.  There just isn’t that much arable land left to work with, so our crops need to grow better: bigger, stronger, more efficiently.  GM crops have already dramatically reduced the use of toxic pesticides and herbicides (which are both expensive and dangerous), and they have increased yields 7 to 20% in some sectors of agriculture already (1).  There are over 7 billion humans on this planet to keep healthy and fed.  Genetic engineering is the best solution we have.

Are there reasons to be concerned about GM crops?  Sure, although not as many as you may think.  But can we really afford to let people suffer and starve, let pesticides choke our ecosystem, or let economies languish while we debate the minutiae?  “Over 25 years of independent research, there is no documented evidence of harm to human health or deaths from consumption of GM foods since they were introduced to the market,” the Genetic Literacy Project reminds us.  Additionally, GM crops must be thoroughly tested before they reach the public (2).  They may be some of the safest things you can buy in the grocery store, and the world desperately needs them.  As soon as people begin to understand the truth, instead of the myth and the propaganda of genetic engineering, we can start using this powerful scientific tool to build a better future. 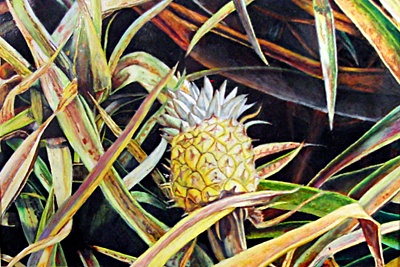 This was as assignment for my Life Sciences First Year class.  We were supposed to write a "blog" about our opinion on GMOs.  This isn't my usual rhetorical style, and it isn't my best work, but it does express my thoughts on the matter fairly well.  Someone might be interested.