Halloween does not deserve to be called a holiday. “Holiday” means “holy day,” but Halloween does not fit this definition. It has deteriorated into a candy fest and a costume-celebrating commercial event, an excuse for money-hungry marketers to sell over three billion dollars worth of merchandise every year.

Halloween began as the ancient Celtic festival Samhain, pronounced sow-en and meaning “summer’s end.” Samhain marked the Celtic new year and was celebrated on October 31. It was believed that on this day the souls of the dead wandered the earth looking for bodies to possess for the coming year. The priest would light a bonfire in the middle of the village to thank the sun god for the harvest and to repel the evil spirits. The villagers would then proceed from their homes to the bonfire, dressing as monsters and being as destructive as they could in order to ward off the spirits.

In the early 600’s, Pope Boniface IV was trying to spread Christianity to pagan people. Since he could not stop them from celebrating Samhain, he put a Christian spin on it by moving All Saints Day (a.k.a. “All Hallow’s”) from November 2 to November 1. October 31 then was referred to as “All Hallow’s Eve,” which has become our “Halloween.”

Today, Halloween makes us think of costumes and candy more than its pagan and Christian roots. The typical buyer is projected by the National Retail Federation to spend almost $50 on Halloween decorations, candy, and costumes. It has degenerated into nothing more than a commercial event: just an excuse to buy stuff in-between real holidays. 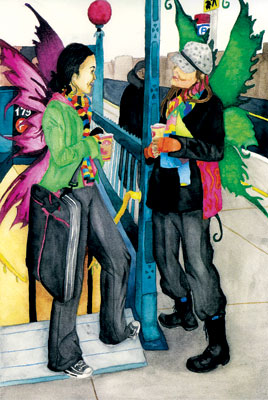 Favorite Quote:
The best way to make your dreams come true is to wake up. - Unknown

This article has 35 comments.

AnonymousPoster said...
on Aug. 16 2010 at 5:10 pm
AnonymousPoster, N/A, Other
0 articles 0 photos 4 comments
View profile
If you think about it, Halloween is probably one of the least commercial holidays.

All are based on some parts of history, from the Jack O' Laterns (which was based on an Irish Folk tale) to the apple bobbing, to the trick or treating (at the end of the fall harvest everyone would go around tasting each others meals. The ones who didn't have any had a "trick" played on them) to the witchs (you've probably heard tales about this).

Halloween is a wonderful mixture of many different beliefs, religons, values, and holidays. Its a day were people can give and give back, to their neighbores, strangers, everyone. Halloween is a holiday just as much as Christmas or Easter or any other holiday. Also, if you ask children what Christmas and Easter is about most will answer "Presents!" or "Candy!" Many people have lost sight of what most Holidays were about but we shouldn't lose them completely by getting rid of them simply because they're "too commercial.

Also, if you're complaining about the price, just look at how much the average american spends on gifts, which is over $1000.
dirinity SILVER said...
on Jul. 26 2010 at 11:40 am
dirinity SILVER, Clayton, North Carolina
9 articles 0 photos 59 comments

View profile
Good direction, though researching more would be great and some of us do actually celebrate the old ways and know that 90% of all "modern" holidays are based upon centuries of pagan holidays. IE Christmas- Saturnalia.
shinytarly said...
on Apr. 6 2010 at 11:26 am

I enjoy the direction of this piece. All to often we find that what was once a sacred day or rite in a certain culture, is merely reduced into a commercialized smorgasboard of candy and gifts.

If there was one complaint I have about this piece, is the fact that it's scope is way too narrow. The premise that Halloween is the only Holiday to be subject to sacralige is quite undeveloped. You'll find that every Holiday, from Halloween to Easter to Christmas, now feature a mascot enticing the masses to buy and spend and buy some more. I really hope that you'll write more and divulge the deeper meaning of several more Holidays, and reveal their origins beyond the seemingly materialistic legacies they have unknowningly left behind.

View profile
I like your point of view but halloween started in the ancient time to celebrate death it's less commonly known as alll souls eve. people used to believe it's where the spirits of the dead haunt the streets but it has been changed to gain something out of it. So it used to be an ancient holiday but now it's an excuse to get chocolate and sweets and to buy scary merchandise. Halloween is great and all too.
skywitch BRONZE said...
on Mar. 31 2010 at 1:27 pm
skywitch BRONZE, Salem, Massachusetts
1 article 2 photos 36 comments

Favorite Quote:
~ A person is smart. People are dumb, panicky, dangerous animals, and you know it.~ Agent K
Men In Black

View profile
Me and my family spend no more that $10 each year on halloween for candy, my mom used to make my costume. And if we're going to talk commercial events what about Christmas? What about people buying all those presents?
paperflowers said...
on Mar. 24 2010 at 7:36 am
paperflowers, Imaginary, Indiana
0 articles 0 photos 176 comments
View profile
what about Holy Thursday? Good Friday? I don't think they've been commercialized, lol. but they may be the only two....
GypsyRose GOLD said...
on Mar. 18 2010 at 8:36 am
GypsyRose GOLD, Charlotte, North Carolina
10 articles 2 photos 3 comments
View profile
Where?...anywhere in this piece did ANYTHING say Samhain is Satanic?....I do not degrade your religion, i would thank you not to degrade mine. *frosty glare*
earthy_kat GOLD said...
on Feb. 15 2010 at 12:06 pm
earthy_kat GOLD, Sebree, Kentucky
17 articles 1 photo 34 comments

Favorite Quote:
"My heart has joined the Thousand, for my friend stopped running today." - Hazel from the book Watership Down (by Richard Adams).

View profile
Chane_2014, to you think Halloween is "satanic" because of its Wiccan/Pagan roots?Or just because people run around dressed up in bloody costumes and have fun?
Claudia Morales BRONZE said...
on Feb. 4 2010 at 8:04 pm
Claudia Morales BRONZE, Miami, Florida
3 articles 0 photos 3 comments
View profile
If every holiday were to be "holy," we would have a minute amount of them. Thanksgiving, for example, is not a holiday with holy origins. And Christmas? It was originally a PAGAN holiday that Christians adopted in an attempt to draw more people to their religion. Valentine's Day? Well, that provokes more of the teenage "love," frowned upon in most religions. Groundhog Day-- well, that's self-explanatory. And even those few holidays with religious origins from the start have been commercialized to a pulp nowadays. Every. Single. One. The article was well-written, but crudely biased.
LihuaEmily SILVER said...
on Jan. 30 2010 at 8:46 pm
LihuaEmily SILVER, North Kingstown, Rhode Island
7 articles 3 photos 196 comments

View profile
Thanks for the Halloween information. The thing is, a lot of holidays have become commercial. Good for you for observing Halloween in your own, more serious way.
drhorriblylate BRONZE said...
on Jan. 30 2010 at 4:33 pm
drhorriblylate BRONZE, Stanwood, Washington
3 articles 0 photos 18 comments
View profile
okay holloween is not satanic, it's just been exploited for it's commercial value. If you even read the article it says it began as a pagan holiday but was assimilated into Christianity . The exact same thing happened with the adoption of the Christmas tree from germanic pagans when St. Boniface used their sacred tree dedicated to Thor and christianized it.
Camplover7 said...
on Jan. 8 2010 at 9:05 pm
Camplover7, Watrous, Other
0 articles 6 photos 8 comments

View profile
I'm a christian as well and do not celebrate halloween either, instead my family take the day of and go and see a movie and go out for pizza. that way i don't have to face all pressures at school and i still have a good time while i'm at it. good article by the way, i'm glad someone got that side out there. :D
KellyR GOLD said...
on Dec. 17 2009 at 2:10 pm
KellyR GOLD, Richmond, Virginia
14 articles 0 photos 258 comments

View profile
In my opinion you are takeing it way to sieriously. Halloween is about haveing fun and createing memories as every holiday is, but if you choose to miss out on some laughs and great times than you have every right to do so.
MarilynMonroe BRONZE said...
on Dec. 4 2009 at 2:16 pm
MarilynMonroe BRONZE, Fayetteville, Arkansas
2 articles 0 photos 5 comments
View profile
But Halloween "all Hallows Eve" or the Eve of all saints day. That is a holy day. I agree it has become a commercialized holiday that degrades women (have you SEEN the costumes??! I was going to be supergirl but had to change when I actually saw the costumes...)
Chane_2014 said...
on Nov. 25 2009 at 6:58 pm
Chane_2014, Williamson, West Virginia
0 articles 0 photos 3 comments

Favorite Quote:
By His Stripes We Are Healed

View profile
You know, as a christian I do not celebrat Halloween,and I glad that someone finaly agrees with me when I say Halloween is a satanic day, and I really likehow you said that is does not even deserve to be a holiday.