A marble clicks across the space between hardwood boards

A child’s finger flicks it across the floor

Its intricate whorls and swirls

Flash in a tiny bit of sun

Such a small motion

Can make all the difference.

Surrendering its tiny bits of gravity

Losing control, rolling, all over the floor

Fingers drop one marble after another

Down the marble-tower in a mad shower

Some get stuck along the way, some spin in the curlicues and tunnels

Whirl down miniature black holes and pass through slides

Clinking and chattering, hailing and pattering

Reflection in a marble

Reflection in a steady eye

One thing is certain—

They all lie still at the bottom and grow silent.

So many marbles, so little time—

Forever whirling in and out of their dress of breath.

Whirling around the sun

How do we say for sure?

Are other universes calling?

My eyes are like marbles beginning their uncertain journey

At the whim of gravity and the turn of a divine hand.

All the rolling and clashing and pattering

Running forever till their slowing.

Nobody can see inside my clear marble heart

A marble may contain a soul, a world, even a universe

But one thing is certain—

One marble can’t know another.

We’re all trapped inside ourselves,

Never thinking that we are together

We all are the same

The flick of a marble, such a small motion

Can make all the difference. 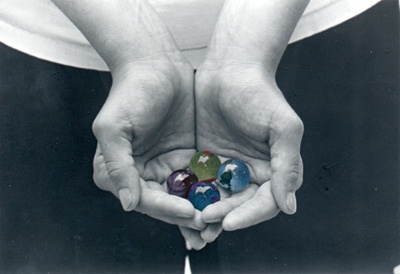 Perhaps it is morbid introspection...but the sight of marbles is enough to provoke an exestential crisis. This poem takes the motion of a marble and turns it into something as big as eternity, then shrinks it to normal size again, leaving the reader's head spinning.  It is me being philosophical to yank people's chains...I am not normally philosophical.

Favorite Quote:
"I can gather all the news I need on the weather report. Hey, I've got nothing to do today but smile." Simon and Garfunkel 'The Only Living Boy in New York'