The United Nation's crane is sinking
into downtown New York, because it was trying
to lift another resolution high above
drowning hands reaching,
but unable to grasp the expensive thing
that some people call a voice.

I would like to sponsor your resolution because it isn't like the ones drafted heavy with inflated words.
Your new resolution which would fly,
because it is a whisper.

It would fly:
Above that twisted resolution machine,
which has tossed itself against the storm,
and now dangles like a lazy flag.

It would fly because your resolution is your whisper,
You, the girl who tries to light your clay stove
under a straw roof in a monsoon.
You whisper it to your baby brother.

your resolution wouldn't begin
with the half-assed promises, which fail to even be
promises if they are read out loud in a whisper
or looked at with one eye open.

Your resolution's clause doesn't begin with
emphasising crackling promises
over a long distance radio.
The operator is too busy using big words
to hear the soft "help" on the other side.

In your resolution clauses would not slip away
like sugar in the corporation's adviser's filmy cup of coffee.
Your resolution would burn through the doctor's corduroys
like an unquenched cigarette
if he tried to slip into his back pocket,
where he keeps his medicine money.


You, with your baby brother in your arms
only know your little house with the leaky roof.
Of your school which you can only look at
through a twisted wire fence, and the market where sometimes
you might sell a braided necklace, died red with clay,
strung with beads made from the stranded shells.
As your hands twist straw into a couple copper coins,
You plea: Give me strength, give me strength.

And I pretend to know you, but I have only
seen you through a half hour documentary,
and through a couple articles which I skim
though on the internet when I'm bored.
You are in every one of my grandparents hand me down
national geographic which I sometimes pick up, but
mostly forget them in the box below my bed.
So forgive me if can't give you strength
when I pretend to represent your country
on a one thousand dollar trip.

You doesn't know about the new compass
lost spinning towards the west, the south
or the various degrees of East.

Your resolution doesn't trap people in shipping crates
with their GDP and life expectancy stamped across
cold corrugated iron.

Give me strength, you say,
Give me strength. Even though you know,
as it gets dark, and the drips of rain come
through the roof your parents won't be coming home
from the farms because they got the disease
but not the pills.

Your resolution would never suggest
that if an assembly of the dictator's diplomats
stand to spew raging words which are translated by
the ear buds into common tongue of comprise,
that the future will be secure.

Because you know that
your future is only drafted in the cries
of brother, and the tapping rain,
and the soggy book you carry by your side,
that someday you hope to decode.

I would like to sponsor your resolution,
even if I can't give you what you need.
Because even from my castle on a hill,
isolated from you by oceans of cement
and freeways, I can hear it.

I hear your one whisper hushed under the
breath of 10 million other children under the leaking roofs.
your only resolution is rising like a hymn
above Africa, Asia and south America.
I hear you, and I wish I could give you more
then what I fill out on an online donation form.
Buying off my guilt, as I can't stop hearing your chant.
Give me strength, you say, give me strength. 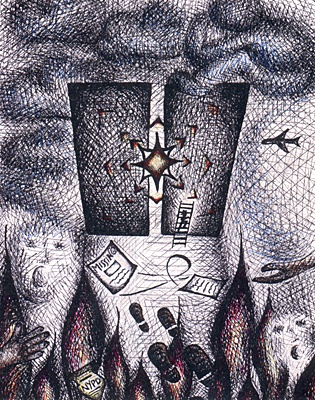 Imaginedangerous PLATINUM said...
on Feb. 19 2013 at 10:52 pm
Imaginedangerous PLATINUM, Riverton, Utah
31 articles 0 photos 402 comments
View profile
Wow. I've read most of your stuff and I have to say you're a terrific writer. Your writing (especially your poems) have an incredible honesty and sincerity in them. I love this piece especially- how you manage to make such a beautiful connection with a girl you've never met.