Favorite Quote:
“You must stay drunk on writing so reality cannot destroy you.”
― Ray Bradbury
“There is no greater agony than bearing an untold story inside you.”
― Maya Angelou
“There is nothing to writing. All you do is sit down at a typewriter and bleed.”
― Ernest Hemingway

His heart is a pallid, blood-stained stone on which bodies are laid to rest,
The axe is raised and felled on innocent necks, putting justice to the test,

An amber autumn stained by wicked blackness as he goes,
Is stanched by a dank and dusty breeze who whispers curses as it blows,

His mouth is beautiful and dark, full of blackened honey lies,
The untouchables, the small, unsuspecting children are poison to his eyes,

Waiting in unending darkness, he watches broken branches flailing,
While all the time, on the ground, he hears the music of the brokenhearted wailing,

He has fingers white as milk, the color of winter’s first flake,
His eyes flicker back and forth, the blackness of them is twisted like a snake,

His hair is tousled bitterly by the claws of ravenous crows,
They watch with beady eyes as the bloody, festering gashes fill with November’s snow,

Laughing maniacally as the world around him falls apart,
He would never have been this way had someone not broken his heart,

With a faded, bony hand he scoops up the remaining ashes of the earth,
And sprinkles them over the graves of his family, whispering chants of revenge and rebirth,

A poison tear burns an acid trail on his young and ashen face,
Once ageless, now forsaken, as he was ripped from the hands of grace,

“Alone… alone… alone…,” his cracked and bleeding mouth forms the hissing words,
He plunges his hand into his chest, ripping out his broken heart, gasping about a curse. 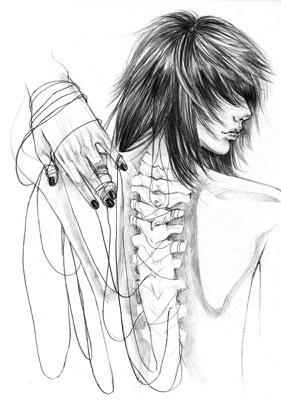 I'm not sure where the inspiration for this peice came from. The character is not based on any person, I just decided to create a blackened soul from the depths of my imagination.