Moth-girl:
fastened to a dartboard,
pins poked through fragile wings.

Girl-moth:
with a boyfriend standing portentous behind her,
scalpel bones digging into deserts of soft flesh.

She spits her watermelon seeds
into the backyard. Something will
sprout in your stomach, if not. Irony
isn’t appreciated when under brutal scrutiny.

He grabs a wrist,
sticky fingers fitting perfectly over sullen bruises.
Her arm doesn’t bend like that, unless
he wants it to bend like that, in which case
it will bend like that.
You see, the autonomy of a body will
bow down to boys with a talent for trapping things,
like a firefly buzzing against the side of a mason jar—

remnants from summers where she had the power
to control things, to hold the jar
instead of cowering inside it.

He puts a hand on her stomach and asks if it’s been more than twenty-eight days.

She is staring off the back porch, fruit
loose in her grip, mouthful of pulpy melon turned to rot
with his inquiry; she mulls the words over,
tastes them thick on her tongue, thinks of the way
he has her captured, wonders how to protect
a little black seed sprout from the other half of its DNA.

No, she says, tossing the rind over the railing.
He squeezes her skin a little too hard
and tells her to go upstairs.

I don’t want to, she replies, but
that’s been said and ignored by her many times before,
and likely will be both by the women who come after her.

He puts a hand on the small of her back
where wings would sprout
and pushes her inside the house. 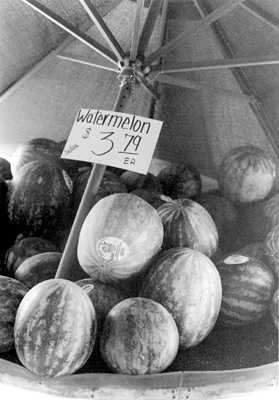