There was a child went forth from many,
And the first woman she saw, that beauty she envied,
And that coveted perfection became part of her, simply because it was trendy.

The magazines became part of this child,
And tanning, and dancing, and beaches, and style,
And false friends, and movies, and parents who riled,
And swimsuits, and ballet, and youthful denial,
All became part of a child so vile.

The diets and trips became part of this child,
And blades, and hipbones, and vodka, and guile,
And ribs, and rehab, and choking on bile,
And cigarettes, and pills, and lies behind smiles,
All became part of a child so vile.

The mother at night sipping her poison alone,
The mother with harsh words with harsh tone,
The father, smart, but passive and never home,
The military IDs, the “Happy Birthdays” through phone,
The polishing of boots, the appearance of bones,
All became part of her on its own. 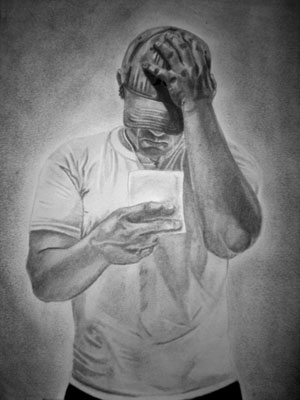 Favorite Quote:
"You may trod me in the very dirt, but still like dust i'll rise" - unknown
"no matter how far you go down the wrong path, you can always turn back"
"once you hit rock bottom, theres nowhere to go but up"

View profile
This is my favorite poem I have ever come across. I even have it memorized. It was printed in the TeenInk magazine and i cut the article out and posted it to my cork board. Great job on this poem. Absolutely stunning.
Bradical BRONZE said...
on Oct. 7 2012 at 10:35 pm
Bradical BRONZE, Morgantown, West Virginia
2 articles 0 photos 10 comments

Favorite Quote:
“I went to the woods because I wanted to live deliberately, I wanted to live deep and suck out all the marrow of life, To put to rout all that was not life and not when I had come to die Discover that I had not lived.” --Henry David Thoreau

This is a really great piece, your a natural. . . keep inspiring.

Favorite Quote:
I have many of these, but here's a main one:
"Animals our not ours to eat, wear or torture, they help us and our environment, and we need to take care of their environment and give them love in return"

View profile
Wow....as soon as I began to read this, I was blown away. Your selection of words is so mature and suave, I really enjoyed this, it's extremely deep and powerful, I can feel the strength in the poem, your wrote this from the heart, this truly is amazing, I'm definitley looking forward to reading more of your work!!!! :))
Karlynne PLATINUM said...
on Feb. 26 2010 at 2:51 pm
Karlynne PLATINUM, Orange Park, Florida
21 articles 0 photos 98 comments

Favorite Quote:
Life isn't about waiting for the storm to pass...
It's about learning to dance in the rain.
-Vivian Greene

View profile
i cant wait to read them!! lol.
Josie_Hogan BRONZE said...
on Feb. 25 2010 at 9:35 pm
Josie_Hogan BRONZE, Pfafftown, North Carolina
1 article 0 photos 2 comments
View profile
Thanks! This is really the first thing i have written. but after i wrote this i realized how much i love poetry and i plan to write alot in the future:)
Karlynne PLATINUM said...
on Feb. 25 2010 at 4:25 pm
Karlynne PLATINUM, Orange Park, Florida
21 articles 0 photos 98 comments

Favorite Quote:
Life isn't about waiting for the storm to pass...
It's about learning to dance in the rain.
-Vivian Greene

View profile
i loved it!! keep writing. check out a few of mine and lemme kno watcha think bout one. love it!! much appriciated.