When my teachers announced that we would see The Blue Man Group during our trip to Boston, I was filled with anticipation. Living outside of Broadway’s home in New York City, I hear about a lot of theater and have seen my fair share. Yet, I had never seen The Blue Man Group and had wanted to go for some time. Friends had described the show as something unique, but nevertheless entertaining and comical. The Blue Man Group seemed like my kind of show. My hopes and head were held high as I entered the theater with my friends.

As I walked into the theater, I was astonished by the intricate room design, which was like nothing I had ever seen before. Clear, plastic pipes ran wild across the walls, ceiling, and backdrops, while toilet paper rolls hung from numerous places across the room. On both sides of the theater, two text monitors displayed random and hilarious facts and information. For example, one message announced a birthday in the audience, and ordered everyone to stand up and sing “Happy Birthday.” Without hesitation, we all complied. In sharp contrast to the theater, the stage itself was almost entirely empty with only a screen on the right. In most other shows, the stage is in design, while the theater is relatively ordinary. It was clear right away that The Blue Man Group was going to be amusing and odd. After absorbing the miraculous set I sat down, hoping the show was going to provide comic relief and an experience to remember. I was not disappointed.

Throughout the performance, there was no clear plot, something very rare for a show. A story line would be perceived by any theatergoer as a vital part to most productions. Yet, even though The Blue Man Group had no plot, there wasn’t a slow moment in the entire performance. A show without a story might seem like a sandwich without meat, yet The Blue Man Group provided laughs in a genuine way. It featured a series of loosely related comical skits. What was unbelievable was that none of the three characters, dressed from head to toe in black with blue head and hands, ever spoke a word. Even though there was the occasional sign or projected word, I found it amazing that the cast could provide so many laughs without speaking. I did have one question on my mind after I watched the show. Were all the jokes and comic actions scripted, staying the same night after night? Or, were they spontaneous and created uniquely for each performance? The mark of a great show is when thoughts remain in the audience’s mind after the curtain closes.

Besides the constant humor provided by the mysterious, but still comical series of events, The Blue Man Group had three other unique features that enhanced my enjoyment of the performance. One was that the main characters interacted with the audience several times during the show. This made everyone feel like part of the comedy, making The Blue Man Group a one-of-a-kind experience. A second unique aspect of The Blue Man Group was the stellar lighting and pyrotechnics. Throughout the show, these devices were wild and complex, adding a lot of energy. Lastly, I loved how the music was so intricately woven into the show. I had never before seen some of the wacky instruments that the performers played, and doubt I ever will again! The music also gave the show an electrifying rhythm and kept the audience moving until the finale.

Nothing I could write would be able to describe the finale of The Blue Man Group. I will not ruin it for future audiences, but suffice it to say, the last ten minutes of the show make the rest of the performance look like a warm-up. The lighting, the pyrotechnics, the music, and the set all build to a crescendo that made me wish the show would never end. I do feel compelled, however, to give you one piece of advice. If there is a plastic poncho on your seat, put it on. 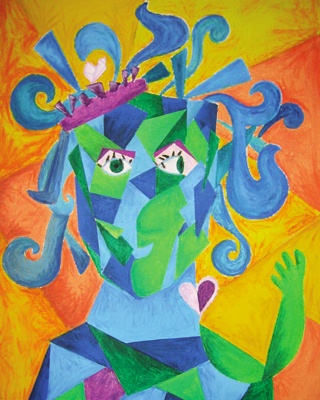