The lights slowly dimmed as the orchestra struck up the overture. People dashed to their seats, clutching their eco-friendly gift bags from the Ozmopolitan souvenir shop, as one of the biggest musicals to ever hit Broadway began.
Currently on its second National Tour, Wicked is the phenomenal show-stopping musical that tells the tale of what happened in Oz before Dorothy showed up. It has won six Drama Desk Awards, 3 Tonys, and a Grammy, for best original cast recording.
In its first year alone, the Broadway production grossed over $56 million dollars. Now this phenomenon of a musical has ongoing productions in Chicago, Los Angeles, Tokyo Japan, Melbourne Australia, London United Kingdom, and Stuttgart Germany.
It has also helped original cast members Idina Menzel and Kristin Chenoweth rocket to stardom. Menzel, who played the original role as Elphaba the Wicked Witch of the West, won a Tony for Best Performance for Leading Actress in a Musical for her stellar performance. Her co-star Kristen Chenoweth, who played Galinda/Glinda the Good, was also nominated in the same category but lost to Menzel.
Since its Broadway début in 2003, Wicked has earned an enormous following of dedicated fans across the world, me being one of them.
I had the great experience of seeing the matinee performance of Wicked’s tour production at the Barbara B. Mann Performing Arts Hall. Being its last matinee performance before moving on to Alabama, the next stop on the tour, the cast pulled out all the stops to make their 2nd to last performance one of the best.
The show started by the orchestra striking up the overture while people rushed to their seats as the lights dimmed. A gigantic metal time dragon, suspended from the stage’s cornice, swayed and lurched into the audience, spewing smoke from its nostrils as its eyes glowed a fiery red.
The ensemble performed the opening number “No One Mourns the Wicked”, telling of how the wicked witch’s death occurred, as gears and cogwheels, built into the stage’s set, cranked and turned, while human spider-monkeys performed acrobatic movements across the stage.
Out of the blue, literally, came Glinda, decked out in a crystal beaded blue satin gown and tiara with wand in hand, from the rafters of the stage in her gigantic metal bubble. Floating around her was a plethora of light-reflecting bubbles which floated down, onto the stage and into the audience.
The show continued with musical numbers chronicling the friendship between the wicked witch of the west and Glinda the good witch.
The show tells of how the wicked witch wasn’t really wicked, just misunderstood. With the more in-depth explanations of the witch’s childhood and young adult life, the show connects with the audience and allows them to understand her actions later in life.
Act one concluded with the heart-stopping number “Defying Gravity”, the show’s most popular number. The wicked witch decides to follow her beliefs instead of her opportunities. In her fiery soprano voice, she belts out the passionate song as she suddenly soars into the air atop her broom in a flood of light, fog, and her long, flowing cape.
During the 15-minute intermission, the audience had their chance to grab drinks, refreshments, and make purchases at the Ozdust Boutique.
As the second act began, I rushed to my seat amongst the sea of theatre-going people, but only after purchasing a few more souvenirs.
The show commenced with a press conference with Glinda announcing to the citizens of Oz not to trust the witch because she is evil and dangerous, although actions earlier in the play oppose this statement.
Not wanting to give away too much, several exciting and anticipating events occurred next in the plot involving both Glinda and Elphaba’s lover Fiyero and the wicked witch’s sister Nessarose, is that a flying house? The show ends with the witch melting, or does she really?
This musical keeps you thinking, singing, staring, and loving it right to the finish. I, along with several other people I know, did not want it to end. If you are interested in learning more about this musical, want to buy souvenirs, want to see it on tour, or even on Broadway you can go to www.wickedthemusical.com for more information. 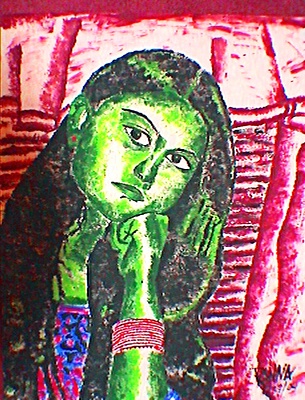