Can someone who was once in slave ever truly be free? The repercussions of slavery bring irrevocable damage to Sethe, an escaped slave who kills her infant daughter to prevent her from being captured. The soul of murdered daughter incarnates as a girl named Beloved, integrating with Sethe's life and bewitching her mind. And now the story begins.

Beloved is a literary fiction novel by Toni Morrison. It explores the destructive effects of slavery and racism on Black people. The novel stands out for the magical realism and fantastical elements Morrison weaves into the otherwise brutal story of a mother forced to make a heartbreaking decision in the face of a terrifying situation. In Beloved, Toni Morrison explores the black American experience. In an unjust society, the characters of her work struggle for identity and self-discovery. Furthermore, the symbolic allusions in the book lend more depth to the interpretation of the reader. Throughout the novel, for example, there are frequent Christian references to convey the protagonist's redemption from her sins.

The novel begins after slavery has been abolished. In Ohio, Sethe lives with her daughter Denver and the ghost of her murdered daughter. She has lost her mother-in-law, Baby Suggs, and her two sons have left home. Paul D, a slave at Sweet Home with Sethe many years ago, then appears to her. The two main characters have both experienced trauma as a result of slavery: Sethe was raped by her master's nephews, and Paul D was imprisoned for trying to kill his last master. Despite the paranormal events occurring in Sethe's home (124 Bluestone Road), they begin a relationship.

There is a young girl named Beloved, who arrives at 124 looking for them after emerging from a creek. Beloved represents the past resurfacing to haunt the present. Morrison suggests that she is the reincarnation of Sethe's infant who wishes to exact revenge on Sethe for killing her. Sethe and Beloved initially interact warmly, but as time passes, their interactions become toxic in a way, since whenever she is with Beloved, she becomes paralyzed by her past. In the presence of Beloved, Sethe's life is drained to the point of exhaustion. She hardly eats, whereas Beloved grows bigger and bigger, eventually taking the form of a pregnant woman, ironically.

Paul D becomes suspicious and warns Sethe, but she is enchanted by the young woman and ignores him. Paul D is approached one night by Beloved, who demands sex from him. In an attempt to tell Sethe about it, Paul D cannot; instead, he wishes she would become pregnant. However, Sethe hesitates to carry another child due to her experience. Paul D tells his colleagues about his plans to start a family, and they react with alarm. One reveals the cause of Sethe's rejection by showing Paul D a newspaper clipping relating to her arrest for murdering her daughters.

A few years ago, Sethe arrived at 124 with her newborn baby, Denver, which allowed her to reunite with her children. The town's residents were jealous of the family and failed to inform them of the arrival of the "four horsemen," or slave catchers. With no time to escape, Sethe took her children with her to the shed and attempted to kill them all with a handsaw so they would not have to endure any further torment. Her oldest daughter was the only one she managed to kill prior to the catchers discovering her.

Paul D is greatly horrified by the news. When he confronts Sethe about it, she defends herself by stating that her children did not deserve what happened to them because slave owners treat slaves like stocks. Sethe comes to believe that Beloved is her deceased daughter she had murdered in light of "Beloved" was all she could afford to have engraved on her tombstone. Sethe is elated, holding onto a hope that her missing husband and her sons will come back and they will all be a family together, again.

As a result of her guilt, Sethe neglects her job and allows Beloved to control the household. Denver recognizes this and calls upon the townspeople to exorcize Beloved from 124. In the aftermath of the exorcism, Denver becomes an active community member, while Paul D meets a bedridden Sethe, who regretfully deems that Beloved was her "best thing."

But, let's think from another angle. Does Sethe kill her daughter with good intentions? Surely she abhors dehumanizing tortures in plantations, but does murdering her daughter more condemnable than sending her to a hellish environment? Sethe's mother instinct drives her to terminate her daughter reluctantly, making her want to redeem herself eagerly. Sethe then uses Beloved as a medium to recover the vanished relationship between her and her daughter. She is held in captivity by her repentance and can never walk out from that: she is not free even after slavery. Her unique tree scar on her back not only represents the long-lasting melancholy from her lost daughter but also shows deep-seated regretfulness.

Besides the content of characters, allusions to Christianity are prevalent also. For example, escaped slaves are likened to Exodus of Israelites, and Four Horsemen of slave catchers are similar to The Four Horsemen of the Apocalypse. In addition, when Beloved makes her appearance, she emerges from the water; when Paul D escapes from the prison, he does so during a flood of water, emerging into an unchained new life. The sign of rebirth and renewal of characters in the book manifest the transformation to a newer yet better life. When Sethe gives birth to Denver, she does it in a canoe on the Ohio River. This river stream outlines the boundary between Kentucky, a slaveholding state, and Ohio, an abolitionist state. The water washes off the menace from the south and leads Sethe and her daughter to promising new life in the north. These symbolic acts of baptism not only cause God to take notice and affect one's life but also inspire hope in the hearts of characters, thus resonating with readers.

Morrison's use of fantasy, hideous poetic style, and the stark contrast between narration and conversation present her book in an enticing yet profound texture of the writing, appalling to readers. 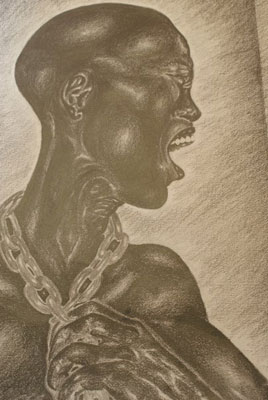