Book of a Thousand Days by Shannon Hale | Teen Ink

Book of a Thousand Days by Shannon Hale MAG

2.) "get your facts first, then you can distort them as you please" Mark Twain

I can honestly say that Book of a Thousand Days is one of the best books I have ever read. It is possibly even better than the Twilight saga, and that's saying something! I was so ­enthralled by this book that I couldn't put it down. In fact, I read it all the way to the end – without stopping!

Lady Saren, the second daughter of the Lord of Titor's Garden (one of the eight realms, named after the eight ancestors), and her maid, Dashti, a mucker girl, are forced to live in a bricked-up tower for seven years for refusing to marry the Lord of Thoughts of Under. Forgotten and abandoned, the two girls survive blistering hot summers and freezing cold winters.

When their food supply dwindles with four years of the sentence left, Dashti decides that it's time to break out. But once out, they find that Lady Saren's city has been destroyed, and all of her people have been murdered. They decide to go to Song for Evela, so that Saren can find her former fiancé. When they get there, they must disguise themselves as mucker girls to get into the castle. And what they do from there is a mystery that you will find out only by reading this book. So get to it! The characters, the plot line, and the themes all tie together to make an awesome story. 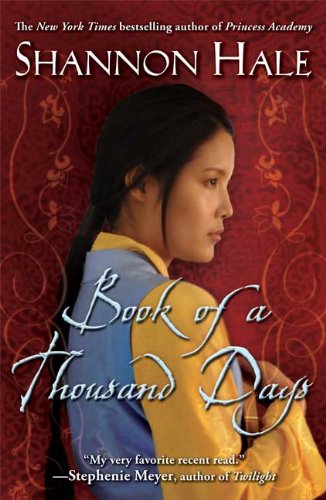 I want you to know that your review has prompt me to read this book. :) Seriously, I put this book on 'my must read list'as soon as I read this in the magazine! :)

I read this book in the 6th grade or was in 7th? Whatever. Your review was good. Keep writng :)

2.) "get your facts first, then you can distort them as you please" Mark Twain