“I will not speak - And my child must seek a heavenly father; she shall never know an earthly one!”

A touching human story of a time that makes us wonder how far religious and moral extremes could take us, this classic has not only survived but flourished. At once a dire warning and a moving story of the human will to survive, The Scarlet Letter is still read by scholars and laymen alike more than 150 years after its publication.

The Scarlet Letter recounts the story of Hester Prynne, a young, recently married woman sent to start a new life in America while her husband remains in England. She is found to be with child by another man. Because she would not reveal the name of her lover after a public trial, she is forced to wear a scarlet letter “A,” marking her as an adulteress. Unknown to her or her lover, her husband stands among the crowd who condemns her. Hester's husband, a cold-hearted man described as “having successfully turned himself into a fiend by taking on the office of one,” moves forward with his plan of revenge in this dramatic page-turner.

Unlike other writers who attempt to depict a time when religious and political zeal outweighed human passion and expression, Hawthorne's experiences provide the background for this novel. His story criticizes the framework of Puritan society in ways so subtle that the reader may very well miss them amidst the fast-moving plot and intriguing, dynamic characters.

Hawthorne's writing is refreshing and real. Making good use of magic realism and vivid imagery, he portrays the Puritan mindset so well that the reader is drawn into the world of 17th century New England complete with witches who fly on broomsticks, people who meet the Devil in the woods and a scarlet letter “A” imprinted in the flesh of Hester's secret lover.

Despite its gloomy message, The Scarlet Letter is also a story of passion and the will to survive. In Hester Prynne we find a woman before her time. Her very exclusion from her town is as much a blessing as a punishment. Marked as an adulteress, she no longer needs to abide by society's rigid expectations and strict morality. Her lover, the minister Arthur Dimmesdale, on the other hand, is forced to deny his desire, his needs and even his humanity because he would not choose Hester's fate.

More than 150 years after its publication, this book contains a message that is as relevant and poignant as the day it was written. It's as much about the abuses of women in a society too rigid in its moral and religious ideals to still be human as it is about two people's will to survive. With the vivid imagery, magic realism and the profound symbolism that mark a Haw-thorne novel, The Scarlet Letter is a must-read for anyone concerned about society, values and the right to be human. 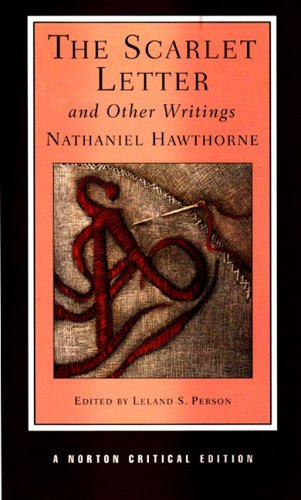 Favorite Quote:
"To define is to limit." Oscar Wilde

View profile
Even though I read it when I was only 12, I thought that the Scarlet Letter was about more than just intolerance and religious fervor but I was unable to decipher exactly what that something was. Now, years later, as your review pops onto my screen, I see now what I felt then. Thank you for putting into words what I've felt for quite some time!
Wandering SILVER said...
on Oct. 11 2014 at 11:11 pm
Wandering SILVER, Seoul, Other
5 articles 0 photos 2 comments

Favorite Quote:
I'm Nobody! Who are you?
Are you - Nobody - too?
Then there's a pair of us!
Dont tell! they'd advertise - you know!

View profile
I agree. This review was very well-written, and having read "The Scarlet Letter," I can completely get your points. This is a wonderful book. I suggest reading it to any who have not.
CelebrateDifferences said...
on Mar. 16 2014 at 7:53 pm
CelebrateDifferences, Long Island, New York
0 articles 0 photos 71 comments

View profile
This review was gripping from the first sentence to the last, leading me with a finaI " I must read this book! "
KatsK DIAMOND said...
on May. 15 2012 at 5:18 pm
KatsK DIAMOND, Saint Paul, Minnesota
57 articles 0 photos 303 comments

Favorite Quote:
The success is not mine, the failure is not mine, but the two together make me.
-- Charles Dickens

View profile
I recently read The Scarlet Letter and -- like many of my friends -- disliked it. I think it's hard to read it when you have a deadline and have to skim through volumes of text that would be interesting if read thoroughly... Your book review makes me want to give it a thoughtful re-read. Great job!
nikkigonefishin GOLD said...
on Jul. 27 2011 at 10:24 pm
nikkigonefishin GOLD, Los Angeles, California
17 articles 1 photo 145 comments

Favorite Quote:
" A smile is worth a thousand words"
" The purpose of the writer is to keep civilization from destroying itself."- Albert Camus

View profile
This is well written and goes over the main points of The Scarlet Letter without giving anything away. I just read the book and thought it was great. I don't why some people think its boring when its very interesting.