I was raised in a Christian home surrounded by a belief system that is notquestioned. Or perhaps was not questioned is more accurate, because after readingThings Fall Apart, I was forced to consider the principles on which I have builtmy life.

In the late 19th century, the Ibo tribe of Africa is visited by agroup of European missionaries. Prior to the missionaries' arrival, the smallcommunity is rather primitive, but thriving nonetheless. An agricultural-basedeconomy consisting primarily of yam production sustains them, and a polytheisticbelief system serves them well. The author describes an environment whereviolence, war and suffering exist, but a strong sense of tradition and culturalidentity bind them into a cohesive community.

A fault line emerges in thesociety with the arrival of the missionaries, who appear to be more concernedwith injecting European culture than the tenets of the Christian faith. Theydisrespect the ideology of the Ibo and use aggressive tactics in trying to enterthe local hierarchy. In a short time, the missionaries manage to create adivision between those holding onto ancient Ibo tradition and the converts whoshatter the community.

Things Fall Apart is an important book to mebecause it provides an alternate perspective on Christian faith and witnessing.Before reading it, I believed the Christian faith was right for everyone and thatit was a Christian's responsibility to impress its doctrines upon others. Inchurch youth group, I was inspired when missionaries told their stories of savingsouls in foreign lands and believed this to be admirable. But after reading aboutcolonialism under the guise of religion, I wonder: Is it right to intrude into asociety that's functioning well and deliver my belief system to them? Is"saving" people worth destroying their traditional way of life? Ischange inherently superior to tradition?

My thought process was alsochanged as I observed the main character. Okonkwo is a man who refuses to acceptthe intrusion, and in his effort to hold onto tradition he is led to violentaction: He murders a missionary because of his beliefs and unwillingness tochange. He disintegrates along with his community due to his xenophobia.

I realized from Okonkwo that often I was stubborn in my beliefs as well.I was unwilling to recognize beliefs that were incongruous with mine, and missedout on opportunities to learn about other cultures. Okonkwo opened my eyes todiversity and led me to be more tolerant. Ultimately, reading and studying ThingsFall Apart has impressed upon me the need for balance between tradition andchange. 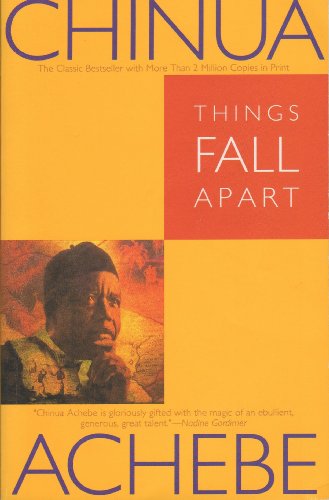 Favorite Quote:
If you love something set it free, If it comes back to you it's yours. If it does not return nnit is not yours and never was.

View profile
Very good gift for words! I read this book in english and i agree with you! Could you look at some of my work...I have 3 things on the website...I would really appreciate it! Comment too