An Equation that Changed the World | Teen Ink

An Equation that Changed the World MAG

Fritzsch manages to make the theory of relativity come alive with fascinating details andfunny but realistic characters in An Equation that Changed the World: Newton,Einstein and the Theory of Relativity.

The story is told in the form of adream experienced by a modern-day physics professor. While wandering around theUniversity of Cambridge, he meets Isaac Newton, who has come back to life. Astubborn man, Newton is upset after reading about modern physics and notunderstanding a lot of it. He and the physicist travel to Berne, Switzerland,where they meet none other than Albert Einstein as he was in 1905, immediatelyafter discovering the theory of relativity. They talk Newton through the basicsof the theory and its implications in terms anyone can understand.

I wasvery happy that this book used as little math as possible, and with the wayFritzch portrays Newton and Einstein as humans instead of faultless geniuses.

At first, Newton has trouble grasping Einstein's theory, and the factthat his own theories may not be entirely correct. However, once he does, hebecomes very enthusiastic and urges his teachers onward. Einstein seems ratherjovial, likes tea and is horrified when he learns his theory led to nuclearweapons.

Unless the reader completely disdains science, I recommend thisbook. It is interesting and informative, and the facts are interspersed withcomic relief and fictional events (such as when Newton is upset because he isproved wrong and nearly throws a fit). I learned some fascinating information,and was encouraged to read other physics-related books, none of which were asinteresting as this one. 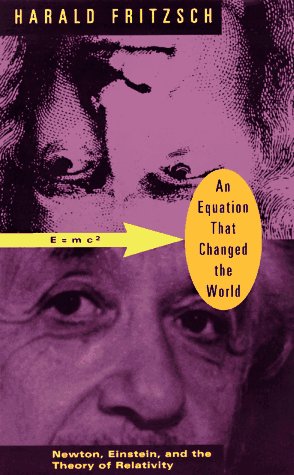 Favorite Quote:
Those who forget history will often repeat it

View profile
i cant believe no one has commented on this article yet.  i am so going to look for this book! you inspired me with this review.  i was just watching a documentary on this theory the other day.  i found it interesting. now i'm going to look into it starting with this book. thanks:)