Let your fears come to life with Darkside, the first book of the series written by Tom Becker. In Darkside, Jonathan Starling is a 14 year old boy whom is “invisible” to the world and barely ever has anything interesting happening in his life, except for his frequent visits to the psychiatric hospital in downtown London to take his dad, Alain Starling, to be taken care of after each “episode” he has. However, when he begins to question his father’s and his own mysterious, hidden history he finds himself being hunted and his only resort is to escape into the dangerous, evil world of Darkside, where he finds isn’t so safe for him after all. If you’re thirsty for the horrors, chills, and gothic world that awaits you in Darkside then this book was meant for you, but BEWARE….

To begin with, Darkside held many enjoyable scenes, although others that were not so great. Initially, the best scene by far was when Vendetta, Jonathan’s powerful, vampire rival, sends clouds of vicious bats to kill, or at least slow down, Jonathan and his friends as they try to communicate with someone on Lightside (our world) to protect Jonathan’s dad from Vendetta’s bloodthirsty fangs while Jonathan tries to get back there to fend him off. This epic climax was the by far the most thrilling scene out of the back that included two heart-felt losses, suspense, tension, excitement. Moreover, my least favorite part of the book, though, was when Jonathan’s habit of sneaking out of school during lunch to explore London was being explained, and all of a sudden Mrs. Elwood, a family friend, calls to tell him that his father has had another of his “episodes.” After Jonathan is barely being introduced and he’s being described one of conflicts is thrown into the story all of a sudden. Overall, my favorite scene was the best out of the all the rest, although the first chapter faltered in its ability to introduce the story.

Also, Tom Becker’s book could have been tweaked with a little, although the author knew what he wanted for his book, and those wise decisions did not disappoint. First, the book was just right to introduce the conflicts of the series that will haunt the rest of the series. Each character’s physical appearance were described in a way that would give the reader a clear image of the character in their head, but the description of their personality was not as clear and was ever-changing throughout the story which was confusing. Next, modern day London, and obviously Darkside, were the perfect settings for the book without a doubt. England was the birthplace of the gothic culture, beginning with the Victorians, so what would be a better setting for a gothic piece of literature then London, England. Just below it is Darkside, the world opposite ours, which is the source and prison for the evil pursuing Jonathan. Lastly, the ending of the book was a bit boring and disappointing. After Vendetta has Jonathan and Officer Shaw, a policeman investigating Jonathan’s and another kid’s “disappearance,” on the floor in defeat Jonathan’s father somehow gathers up his strength to wake from his coma and stab Vendetta to protect his son. Jonathan faints from weakness after witnessing that, but in the last chapter as the book is closing him and Carnegie, a wereman friend of Jonathan’s father that was protecting Jonathan in Darkside, are watching the new Sergeant Shaw announcing to the press that the two missing children have been found and the case is closed, although that is just a cover up brought on by Carnegie’s threats to rip Shaw’s guts out. And so Jonathan stays to hide out with Carnegie in Darkside even if he’s in danger due to the short distance between him and the probably vengeful Vendetta whom is still alive. If a few elements of Darkside could be fixed or changed the book would be a tad bit better. 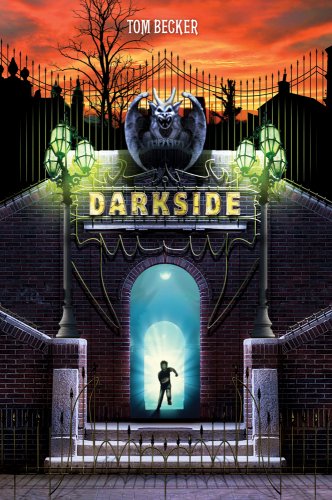 
Buy from Amazon
The author's comments:
The original title for this piece that I gave it is "The Dark Side of the Light" but Teen Ink is going to use the title of the book as the title of my work instead :(
Post a comment
Submit your own