My Sisters Keeper by Jodi Picoult

Favorite Quote:
Shoot for the moon and if you miss you will still be among the stars.
Les Brown

My Sister's Keeper is about Anna Fitzgerald, a thirteen year old girl who was genetically engineered to be a perfectly matched donor for her sister Kate (16) who has leukemia. Anna is quickly becoming upset with her parents, because she feels that they only wanted her for “spare parts” to help her sister stay alive. She decides to sue her parents for the right to her own body and the right to make her own medical decisions with the help of attorney Campbell Alexander. If Anna goes through with the lawsuit, she won’t have to give a kidney to Kate, who will die without it unless they can find another match in time.
When he learned about the lawsuit, her dad Brian has tries to keep from taking sides between Kate and her mother, Sara, who feels that Anna should donate the kidney because it’s her sister and it will save her life. Sara, who is an ex lawyer (she quit when Kate was diagnosed at two with cancer) decides to represent her and Brians side in the case. Sara try’s everything to get Anna to keep from going through with it, but Anna refused to budge. Her mother’s harsh words push Anna to move out of there families home, and into the fire station were her dad works.
Meanwhile, the oldest child Jesse is so hurt by Kate’s disease, that he begins to get involved in alcohol and drugs, which bring him to do things such as theft and arson. He is responsible for a recent string of warehouse fires in town that his father and other firefighters have been putting out. After being caught by his father, Jesse turns himself around, and ends up becoming a police officer.
My Sister's Keeper is a page turning whirlwind of emotions that you will want to read in one sitting. The ending was the only part that troubled me a little bit because it feels like a slap in the face towards reader. I know that things like that like this do happen in real life, but I believe the book would have been better if it had ended much sooner. 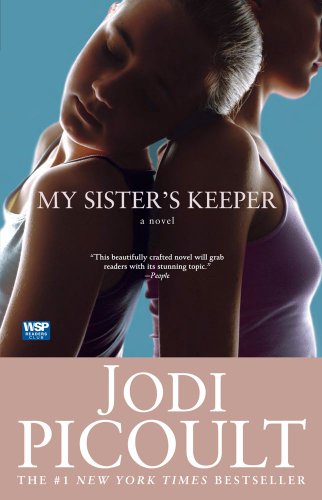 
Buy from Amazon
The author's comments:
This is one of my favorite books of all time!
Post a comment
Submit your own

Favorite Quote:
Shoot for the moon and if you miss you will still be among the stars.
Les Brown

View profile
I seen the movie and want to readf the book. Very nice way to describe it. Thumbs up!