The Graveyard Book by Neil Gaiman

The Graveyard Book by Neil Gaiman is a young adult fiction book that is about a kid, Nobody Owens (Bod), growing up in, well a graveyard, before he ventures out into the world on his own. The book’s cover is not 100% clear as to what it is. The art is simplistic, but unidentifiable to me. Since the book is one about graves and such I would assume it is a headstone, but it doesn’t really look like one to me. This book definitely is enjoyable to all ages, but the specific target audience is that of the younger kids, otherwise it is just a cute story.

The main plot of this book is that a boy, unnamed at this point, is the last survivor of a murder. His family is targeted by a secret group of individuals who have their own agenda. He survives by being curious and walking outside his house while the killer is working his way through the list. He is saved by a non-dead, non-living man, Silas, and all the ‘people’ of the graveyard. He lives with them and is guarded by Silas and Miss Lupescu mainly, but the entire graveyard is now his family. Being the only alive person living in the graveyard he is given the freedom of the graveyard. This means he can see the inhabitants without them doing what they call fading, or rather un-fading, and use their ‘magical’ powers to survive and navigate the graveyard without restraint. The book features many scenes, such as the graveyard, the ghoul world, and the town surrounding the graveyard. Nobody Owens, as his family now calls him, has to defeat the evil opponents, and save his childhood friend, Scarlett, but in the end he loses her and his family, not to death, but just the necessity to move on and grow up. The entire book is about him growing up over the ten years between 6 and 15, at the end he is forced out of the graveyard like a bird kicked from the nest. He saves the graveyard from evil. Grows up with reluctance, after thinking of all the things he wants to do and see in the new world laid out in front of him.

Nobody Owens is a great character, reflecting the writing style of Neil Gaiman beautifully. Neil also wrote Coraline. The classic story of the struggle of a kid growing up and having to leave his childhood behind and venture out into the world told in a non standard way. I enjoyed every word of this book, as it was simple, eloquent, and intriguing to read. The book shows the internal mind of a kid through his simple technique of having a kid who doesn’t understand the outside world, but still has the same problems all people have. Children just don’t always know what to do. That’s what growing up is about, and that’s exactly how Nobody Owens comes off being. When Bod tries to talk to his ‘parents’ about his new teacher Ms. Lupescu, they ignore it and simply say, “Aren’t you meant to be studying anyway?” I hate to repeat the same word over and over again, but, classic. Kids often think they aren’t being taken seriously or they are being ignored. It happens. I would rate this, based off the fact it is YA fiction, A- to explain, the words are severely lacking in strength and challenge for someone of this age group. Although Neil gets his point across, it seems there should be more. Also, the book has great material and messages within, it is fun, and it won’t make you regret reading it like some books these days. Highly recommended for anyone not looking for a challenge, but at the same time, looking for an enjoyable read. 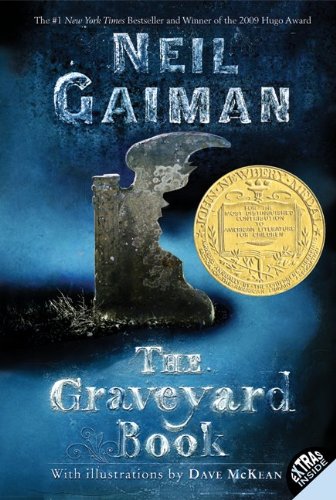