Favorite Quote:
You've got to have ink in the pen!

Ragged Company, by Richard Wagamese, is a story that explores the true meaning of ‘home’, and the significance of acceptance within friendship. Told from five alternating perspectives, the development of a sense of belonging is evident in each of the characters’ personal lives, as the plot advances.
One For the Dead, Digger, Timber, and Double Dick are a circle of loyal friends, surviving day to day on the streets. One For the Dead (Amelia One Sky) is the mother figure of the group, who intuitively chooses each companion by native spiritual guidance, knowing deep within that they needed each other. It was Amelia who instigated the unlikely friendship circle, and eventually expanded it to welcomed an outsider; the common man, Granite, whom Digger refers to as the ‘Square John’.
Digger is the least trusting of the original foursome, and the most proud. He takes pride in his independence and ability to survive; he’s proud of his street status as a ‘Rounder’. “I’ll never be one of those street people all weepy and crying and sh*t. You live on concrete long enough, you pick up the nature of it: cold, hard, and predictable. It’s called survival, and every Rounder knows it. Me. I’m a Rounder. I’m concrete. Poured, formed, and set.” In his stubborn pride, Digger is unwilling to accept Granite’s friendship for a long time, because in his mind, Granite isn’t one of them. He’s not a Rounder, he’s a Square John. He hasn’t struggled to survive like they have. He has a home and all the common necessities. He could never possibly understand the loyal Rounders’ Code. Or could he?
Through the experience of winning the lottery, the lesson to be learned for the homeless foursome, is that Home is not simply a physical structure. Granite, though in possession of a physical house in which to sleep, is “as homeless as they were.” Granite is essentially homeless in a spiritual sense, due to his loneliness and lack of belonging. The foursome, and Granite, all learn that home is the place of pure, unbiased acceptance; where the spiritual residue of you and your loved ones resides, keeping memories alive. Home is a place of history and love. It is “…a truth you carry within yourself. It’s belonging, regardless. It’s the place you never need to qualify or measure up, the place that you never have to fear losing. It’s bred in the heart and germinated by sharing, spawned by community.” The group ensemble, including Granite, come together in mutual homelessness, and create a home, disregarding their differences in past and background.
I truly feel Wagamese’s novel was meant to teach the common man (or common woman) to relate to those whom we would originally assumed have nothing in common with us; the homeless. I believe Ragged Company was purposed for evoking the spiritually homeless emotions within all of us; the sense of loneliness and lack of belonging. We all feel we don’t belong at one time or another, and we always long to come back Home, wherever that home might be. Love and acceptance is essential for survival, whether you are homeless, common, or even considerably wealthy. I personally was emotionally convicted of these things, and was nearly brought to tears as I saw myself in each of the characters, in the tiniest ways. I’m inspired to make all who know me feel accepted; to feel at home, because who isn’t a little homeless? 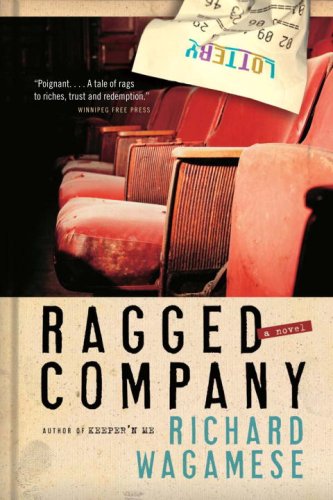 
Buy from Amazon
The author's comments:
I encourage teens to try reading something a little more mature. To step out of the vampire romance comfort zone!This book was truly beautiful.
Post a comment
Submit your own