There is something dreadfully wrong in the kingdom of Sevairn. The king has exiled his head advisor for supposed treason, has arranged a sudden marriage for his son with a princess he has never met, and is completely ignoring the looming danger of an impending invasion. Prince Eltiron, with the help of his aunt Vendaris, a mercenary, does not believe that the Jermain, the exiled advisor, is guilty, but there is little that they can do. Jermain, who has been forced to flee for his life, is rescued by the mysterious sorceress Amberglas, who is soon to accompany the lovely Princess Crystalorn to Sevairn to meet her intended husband. He believes that his friend Prince Eltiron has betrayed him, so he turns his back on his old life. However, it is not long before he finds himself tangled in politics once more when he joins Carachel, the Wizard-King. Magic, mystery and trouble abound as the invasion draws closer, but is their enemy truly who they think it is?
This book has everything a good fantasy novel needs. An aging king, a prince with confidence issues, a villainous advisor, a beautiful princess, wizardry, evil, romance, humor, nonsensical character names, etc., etc., etc. I have always loved the works of Patricia C. Wrede, but I couldn't find this one anywhere until recently and I am really glad I did! I loved the characters, especially the vague and confusing sorceress Amberglas. Her dialogue was so much fun because you have to puzzle through it before you can completely understand what she means. Prince Eltiron is also a great character, I can feel a lot of sympathy for his nervousness. The romance could have been developed a little more, but it was still fun. 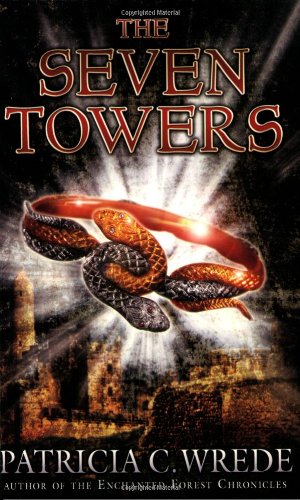