loved this book. I picked it up because of the gorgeous cover and because I had heard that it was steampunk. Other than that, I had no idea what I was getting into. I blame this book for the fact that I now read the occasional vampire/werewolf/paranormal novel. By the time I realized that vampires were going to play an important role in the story, it was too late. I was caught. Doomed. I couldn't put it down and before I knew it I was addicted to the works of Cassandra Clare.

Tessa is an absolutely brilliant character. I love the mix of proper ladylike behavior and stubborn bravery. I love the way she loves classical literature and references it all the time. I also love the fact that Will knows all of her references and makes his own.

Will is an extremely dubious fellow. Darkly handsome and mysterious, plus the fact that he is British, well, Welsh anyway, he is an interesting character. The problem is, he also a total jerk. For some hidden reason, he won't let anyone close, and is horrible to anyone who tries. Still, there is hope for him, revealed in brief flashes of tenderness and humanity.

The secondary characters in Clockwork Angel are lovely. Jem, Sophie, and even the bratty Jessamine are all interesting and likable in their own ways. I loved Henry. I would have liked to see more of him, but there is always book two...

The plot is dark with a delightfully dreary, Victorian feel to it. Murders, disappearances, strange magical abilities, untrustworthy businessmen, equally untrustworthy Downworlders and some extremely irritating Shadowhunters combine to make an adventure that is part Charles Dickens, part Sherlock Holmes, part...actually, I can't think of any other paranormal author that can quite be compared to Cassandra Clare. Anyway, it is wonderful.

I recommend this book to lovers of dark fantasy, YA paranormal, Victorian mysteries and star-crossed lovers. My only real problem with this book is the fact that Clockwork Prince doesn't come out until December. (Grr.) 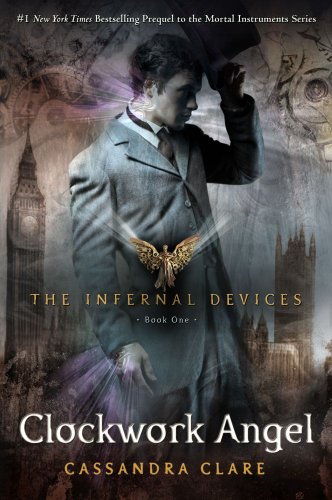 
Buy from Amazon
The author's comments:
I first read this book because I love steampunk and it taught me to love paranormal, too.
Post a comment
Submit your own