"The scent rolled over him.
He looked up.
Overhead, a lilac tree was in bloom.
Damn! Damn! Damn! Every year he forgot. Well,no. He never forgot. He just put the memories away, like old silverware that you didn't want to tarnish. And every year they came back, sharp and sparkling, and stabbed him in the heart. And today, of all days...
He reached up, and his hand trembled as he grasped a bloom and gently broke the stem. He sniffed at it. He stood for a moment, staring at nothing. And then he carried the sprig of lilac carefully back up to his dressing room."
So begins Night Watch, a book by Terry Pratchett in his wonderful and popular Discworld series. The gist of Discworld is this: A flat planet, it is supported by four turtles (used to be five) who stand on the back of a giant turtle that "swims" through space.
This book isn't so much about the world as about people, and the things that they do to each other. The main character? His Grace, His Excellency, The Duke of Ankh, Commander Sir Samuel Vimes (known as Mister Vimes to his close friends). He didn’t want to be a duke. In fact, he started out a kid living in the slums of the city of Ankh-Morpork. He remembers his childhood all too well, because he is re-living it. Today he has been transported back 30 years (along with a psychopath—just a minor detail) and must take the place of his former mentor who taught him everything he knows. He’ll have to teach it to himself all over again—his sixteen-year-old, naïve self, a new Lance Constable on the Night Watch. He’ll have to learn fast, because there’s going to be a revolution at the end of the week, and according to history, he died….

This is one of the best books that I have ever read. Several times, I cried because it was so emotional and sad. The character of Sam Vimes really shines in this book, and the writing is amazing. A lot of things mentioned in previous Vimes books were explained, and this is truly one of the greatest books in the Discworld series, if not ever. 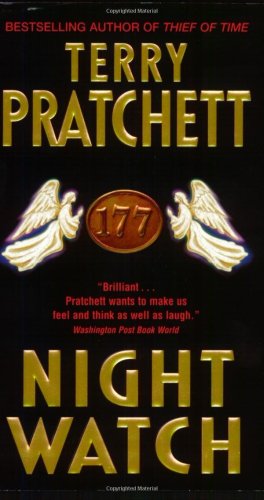 
Buy from Amazon
The author's comments:
An amazing book I've been looking forward to reading for a while.
Post a comment
Submit your own