Lucky is the fifth book the series The It Girl, by Cecily von Ziegesar. This is the story of high school juniors attending one of the most prestigious and elite prep schools in the country, Waverly Academy. They are boarding school students, and all come from rich, privileged families that can afford to buy off any mistakes their kids make. Except one girl, Jenny Humphrey, who comes from a family living in Brooklyn, in a two-bedroom apartment. She got accepted through an art scholarship, and caught everyone's attention from the moment she set foot on campus.

One of the teenagers decides to throw an off campus, secret party. But it ends in chaos as one of the students accidentally burns down an old, historic barn. Nobody wants to admit who did it, even if they have a pretty good idea of the suspects. The principal declares that somebody must be held responsible for this terrible act, and unless one person confesses, all of the kids will be expelled. This makes everyone tense, and tempers start to flare.

Creating suspense is definitely the author's strong point. I couldn't put the book down! There were so many surprising twist and turns, and it definitely didn't turn out the way I expected. It almost seemed like a mystery, as everyone tried to figure out who burned down the barn.

One pleasing part in this book was seeing how the kids lived at boarding school. I really liked the detailed description of this elite East Coast school. It gave me a taste of what a fancy school like this would possibly be like.

Cecily von Ziegesar writes in a way that flows incredibly well. Each person had a confusing story line, but somehow all of the pieces fit together in a beautiful way that left me wanting more.

Lucky made me think about how all actions have consequences. It also made me think that everyone makes mistakes, and that it is better to just be upfront about them, because you may end up suffering less if you do. This was a really good book with an interesting and surprising ending!

Comment: I feel that my book review flows very nicely. It doesn't sound choppy or broken up. I think it is similar to the model book review, but not identical. It has it's own sense of writing style that is definitely mine. I think that I like my version of the book review equally as much as I like the model one. 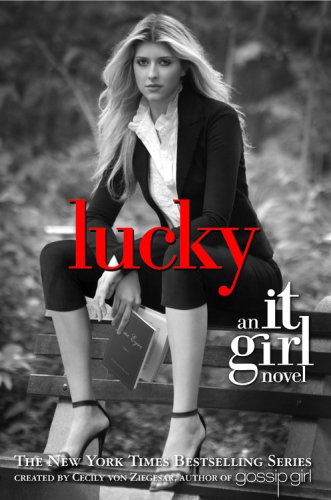