House of Dreams by Pauline Gedge

Question: What were the three most dangerous things a woman in ancient Egypt could be?
Answer: Ambitious, intelligent and beautiful.

Thu, a girl from Aswat, a small hamlet in the south of Egypt, is all three of these things. She wants more than the few prospects Aswat offers her. When the great seer Hui makes a pilgrimage to the temple of Wepwawet (Aswat’s totem), Thu sees her opportunity to escape.

Rather than sending Thu away when she sneaks onto his barge, Hui takes her under his wing and trains her to become a healer. He did not do this out of mere kindness, however. Hui sees a great destiny for Thu and he schemes to achieve this by bringing her to heal Pharaoh Ramses III, who immediately places her in his harem. Thu soon becomes Pharaoh’s favourite concubine, a position fraught with danger that brings ‘House of Dreams’ to its tragic conclusion.

I stayed up until four in the morning to finish this breathtaking novel. Thu is not a sympathetic character, but she is so interesting that she commands your attention. The story of her rise to (and fall from) grace is one that is unforgettable. Pauline Gedge brings the enchanting era of the 19th Dynasty to life with her incredible knowledge of ancient Egypt and her compelling characters. ‘House of Dreams’ is a book I would highly recommend. 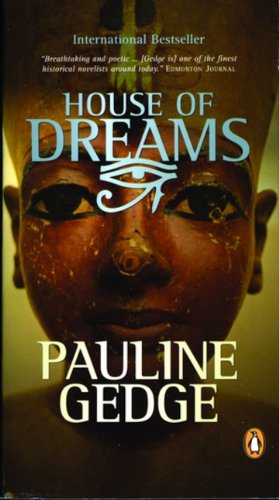 
Buy from Amazon
The author's comments:
This is another one of Pauline Gedge's great books. I can't wait to read the sequel, 'House of Illusions'.
Post a comment
Submit your own

This article has 25 comments.

View profile
u make my reviews look like they were written by a 2 year old good job and i can tell u like historical suff egyptian to:P good job
CarrieAnn13 GOLD said...
on Jul. 17 2011 at 1:35 pm
CarrieAnn13 GOLD, Goodsoil, Other
12 articles 10 photos 1646 comments

View profile
Thank you!  And I wasn't always drawn to historical fiction.  I received 'The Twice Born' by Pauline Gedge for Christmas last year and I was hooked.
NinjaGirl BRONZE said...
on Jul. 17 2011 at 2:33 am
NinjaGirl BRONZE, Valley City, North Dakota
1 article 0 photos 202 comments

Favorite Quote:
The only thing holding us back in life is our desire to stay where we are and not venture further.
~Some random person on the Internet :P

View profile
I have to admit, at first I still didn't have much attraction to this genre, despite your awesome reviews, but now I can genuinely say that I'll definitely be reading some of these! Amazing job!
CarrieAnn13 GOLD said...
on Jul. 12 2011 at 10:33 am
CarrieAnn13 GOLD, Goodsoil, Other
12 articles 10 photos 1646 comments

View profile
I liked how you told the reader just enough about the book to keep them interested, but not to much as to give important details away. Well done.