The Wolves of Mercy Falls Trilogy by Maggie Stiefvater

I am reviewing this series all together because they flow perfectly from one to another and I read them over a period of two days. I love, love, love this series so I am going to talk about them a lot and I will probably give things away, so I am putting a spoiler alert on most of my review. For those of you who have never read the series and don't like spoilers, I will share a few of the adjectives that I will probably use in my review. Beautiful. Lyrical. Unique. Abstract. Bittersweet. Tragic. Joyful. Perfect. Pure. Amazing. Heartbreaking. Breathtaking. Lovely, absolutely lovely. I may use some of these adjectives multiple times to get my point across. I cannot recommend this series highly enough.

Shiver is such a perfect title for the first book in this series. It sends shivers down your spine and all over every inch of skin as you read. The first thing I noticed when I opened Shiver was that the text was a lovely shade of blue that matched the cover. I thought that this would bother me, but within two chapters I realized that I liked it. It was another thing that made this book unique.

The second thing I noticed was the beautiful writing style. I could drown in those wonderful, lyrical words. It is written in the alternating points of view of Grace Brisbane and Sam Roth. Both are distinctly different individuals with their own unique style. I loved them both, but Sam in particular. His side of the story is so heartbreaking, his words so abstract and beautiful. When I read about his past and what his parents had done to him, I wanted to cry. I don't think I have ever become so invested in a character so quickly before, but Sam's vulnerability and simple dreams captured me immediately.

Grace is a more subtle character, so it is harder to pinpoint the moment when she slipped under my guard. By the time I noticed, she and Sam where two parts of one whole instead of separate entities. The idea of one without the other is just wrong. Sam is the leader, but Grace is the one who gives him strength and keeps him gently rooted in reality when he threatens to fade away.

In Linger, their fragile happiness is slipping away. Sam is now Sam for good, but Grace is the one trying to remain herself. They all know that something is wrong, but they feel that if they say nothing then it won't be real. Until it is too late. And their world breaks.

In addition to the Grace and Sam, Linger is also told by Isabel Culpeper and Cole St. Clair. Isabel is feeling terribly guilty and angry over the death of her brother, and Cole is a rock star on self destruct who voluntarily became a werewolf. Isabel hides behind anger and rebellion, while Cole is quite honest about his self-hatred and his desire to lose himself forever. Their relationship develops slowly and with a great deal of reluctance on Isabel's part while Cole fears that he will destroy her like he did with his other friends. They are constantly fighting, but somehow they fit perfectly.

Linger ends on a tragic, bloody, frightening note. Now Sam is the one waiting and watching while Grace runs in the woods, unaware of who she is or who she has left behind. I am so glad that I waited until I had Forever to read this, I would have hated to wait.

The beginning of Forever is so bittersweet it hurt. When Grace first became human and Sam went rushing to find her, it was so sad when he arrived only to find the clothes she left behind when she forgot herself once again. Without Grace and threatened with losing her forever, Sam has to finally face his worst fears: his past and his future.

Cole finally finds a purpose in trying to save Grace. He moves from self-destruction to self-experimentation in an attempt to find a cure to the disease that makes them shift from man to beast. I liked him a lot more in Forever than I did in Linger. He sees what Sam and Grace have and he knows that he doesn't want to see something so right disappear.

The danger rises and Isabel becomes a spy when her father plans to organize a wolf hunt. They need to get the wolves out, but the wolves will only follow one of their own. With Cole's science, Sam's leadership, Grace's support, Isabel's position and the help of a sympathetic police officer, can they save themselves and their lupine family?

Now that I have gone through the specifics of each novel, I can address the general themes of the series. I shall start with the hardest: parents. Parents play a very important role in the series. Sam's mother and father held down him in a bathtub and cut his wrists when they couldn't deal with his disease. Grace's parents neglect her for most of her life only to try to step in and change her when they don't like what they see. Isabel's mother is out of it for most of the time and her father is determined to kill Isabel's best friends to give himself purpose after the death of his son. Cole has ruined his life to prove that he isn't his father. And then there is Beck, who made Sam into the person he is but also made so many mistakes.

While Sam's parents are awful, they aren't really in the story. All you see are the scars they left behind. Likewise, you never meet Cole's father, you just hear about how his expectations pushed Cole away. I can almost understand Isabel's parents; they lost their son and fell apart. This does not excuse their actions, but I can understand them. The parents who are most important in the series are Grace's. They seem like the most ordinary of the lot until you look closer. They do what they think good parents should do, but it is only on the surface. Because they have ignored her for years, she is more of an adult than she is a teen. They only pay any attention when there is trouble and then they treat her like the protected child she should have been rather than the woman she is. Their inability to listen and understand cost Grace and Sam precious days.

Beck, the closest thing to a real father that Sam has ever known, is a very complicated and fascinating character. He infected Sam and then regretted it so much when he saw what pain he had caused. He loved Sam like a son and did everything he could to atone for what he had done. When Sam begins to learn his secrets in Linger, it damages their relationship almost irreparably and hurts Sam all over again. And yet, there may be just enough time for forgiveness.

The heroes of this series are all broken, each in their different ways. But who says that broken can't be beautiful? They turn the most horrifying pasts into a future that is oh so bright. It is amazing to watch. When reading this series, I was so scared that it was going to end in tragedy but I didn't want to see it all boxed up into a picture perfect smile. I need not have feared; the ending was perfect. It was a mixture of pure joy and hope and sorrow that had me laughing and crying at the same time. It was four in the morning when I finished it. I had meant to go to sleep sooner but I just couldn't stop. For the rest of the day, I found myself smiling at odd moments, like when Hotel California played on the radio and I was reminded of Cole's twenty voicemail messages. This is a series that stays with you.

I loved this series with its breathtaking changes from tears to joy and back again, with its beautifully broken characters, with its prose that feels more like poetry and everything in between. I fully intend to read these books over and over again and I think you should, too. :) 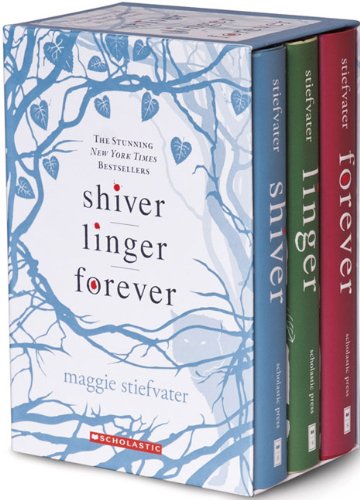