This book was absolutely positively AWESOME!!!! I read it in one sitting and finished it very early in the morning. And then spent several minutes sputtering into my pillow to avoid waking anyone up. For once, it wasn't the cliffhanger that was that bad, it was everything else! Clockwork Prince has replaced City of Glass as my favorite Cassandra Clare novel. It has been weeks since I borrowed it and I am still on a cliffhanger high!

Will, oh poor Will. You finally learn why he is like he is and it is utterly heartbreaking. You see sides to him you never saw before including one that can only be described as bouncy (and no, I am not telling you why. Plus there was that one hilarious scene with Magnus that still makes my sister and I giggle when we remember it.) The mysteries of his life are revealed...but is it too late to get the girl? You fall in love with him even more than ever. At least, I did.

Jem, the other side of this brilliant love triangle, is even more radiant than in the first novel. The romance between him and Tessa heats up until you honestly can't tell which boy she will choose. He is much more developed than in the first novel and you even see him completely furious at one point. I love him almost as much as I love Will, and it makes me sad to think that because of a...certain thing that occurred, he has been doomed. But then again, you can never tell with Cassandra Clare. There may be hope for him yet.

And then there is Tessa, caught between two wonderful, tormented young men who both love her desperately. One broke her heart, the other is slowly dying, which one will she choose? I came to respect her a lot in this book, more so than before. There is a particular thing that she did that turned out to be a mistake, but she acted with absolute honor and selflessness despite her regret. She has become stronger than she was, but will she be strong enough? More is revealed about her possible identity, but what they discover points in an impossible direction. There are so many ways she could go, and not all of them are pretty.

I think what makes this love triangle so unique is that not only do both guys love the girl, but they both love each other more than themselves. They have been more than fighting partners, more than even brothers, for much longer than either of them have known Tessa. But she may be the one thing that can tear them apart.

The plot is as convoluted and marvelous as ever, leaving you with more questions than answers and begging for more. I may go insane before November and Clockwork Princess. 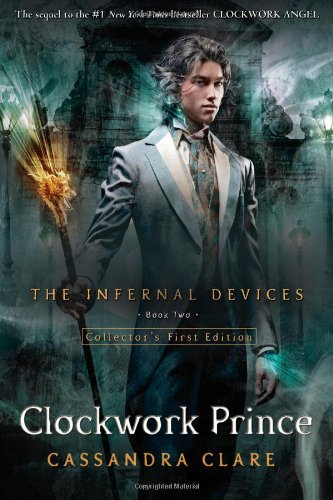