A new German thriller written by Ursula Poznanski has now been translated into English by Judith Pattinson. Erebos is set in a very ordinary high-school. Ordinary until objects are being discreetly exchanged between students, until rumors go around the school about a spine-chilling but amazing computer game. For weeks Nick waits for a copy and eventually gets his hands on one. Nick discovers that the game is addictive and the graphics are flawless. He also comes to discover that the game is run by The Messenger, a skeletal man in a cloak with yellow eyes and a disturbing laugh. The Messenger knows your real name, your friends names, your hobbies, everything. And in order to keep playing online you must carry out actions in the real world – actions that become more and more manipulative.
Ursula Poznanski has managed to come up with an original idea, likeable characters, and a writing style that paints the most vivid image with the fewest words possible. Not to mention the unexpected twist at the end. Erebos is probably the best thriller I have ever read, and thanks to Judith’s brilliant translating you would never be able to guess it was once in a completely different language if you weren’t told. Judith’s translating means that the storyline and vocab flows perfectly from beginning to end. And Ursula made sure every paragraph was interesting and exciting.
This book is not recommended for anyone under twelve. The language can be quite gruesome and the creepy concept may give anyone younger nightmares. Although I am sure anyone twelve and over will thoroughly enjoy it.
I am really looking forward to the day when more of Ursula Poznanski’s writing is translated. 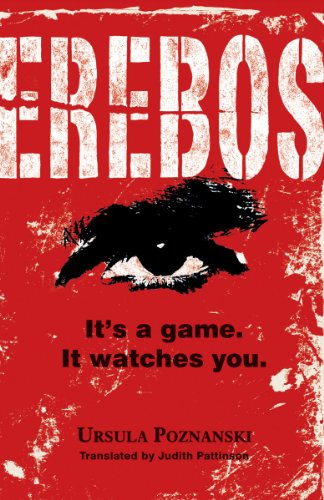