Ministry of Pandemonium by Chris Westwood

Ministry Of Pandemonium by Chris Westwood is a “paranormally-compelling” (Guardian) book about Ben Harvester, a gifted boy who has always been a born helper. One day he stumbles across Mr October, a man who didn’t look like anything special until he starts changing faces, plucking food out of the air and guiding the dead into the light. Ben soon discovers he has a unique talent, a great gift that puts him in serious danger.
The writing in Pandemonium is very clever and with its spine-chilling and creepy style it could almost be a horror. The clever part is the Black humour and funny dialogue that lightens it up and leaves you exhilarated with suspense but smiling from Mr Octobers jokes at the same time. The descriptions are believable and funny because most will relate to them. In a classroom of children it describes two twins “whose cold stares and sly smiles made him think they were sharing telepathic jokes about him” and “a red haired kid with permanently encrusted snot on his upper lip like a silver-green alien moustache.”
Chris Westwood’s writing in Ministry Of Pandemonium is clever, but its first-person style may not appeal to everyone. If the reader is used to third-person then they might find it difficult to read and might not understand. Of course, this is all the more better for those who like to be in the character’s shoes, or those who really don’t mind, but some readers may not enjoy it for that.
Ministry Of Pandemonium is a wonderful, quirky thriller, great for boys and most girls above the age of ten. It is a promise that every child who reads it will get something out of it. 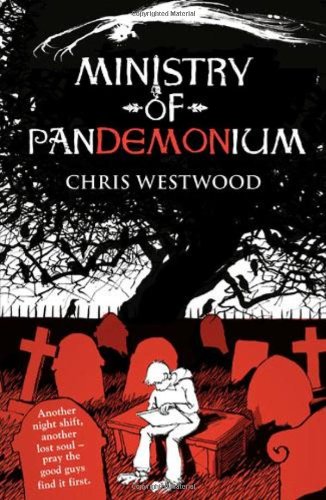