The Crucible by Arthur Miller was about a panic that spread through the small town of Salem. The panic was the fear of witchcraft and the devil. In 1692 twenty three men and women were hung, one man was pressed to death, and over 150 people were jailed for accusations against them saying that they had ‘signed the devils book’. If someone was accused they lost everything, but if they confessed and let ‘God back into their heart and shut the devil out’ then they would not have major consciences except ruining their family’s name. If they were to plead not guilty they were imprisoned and eventually hung. In The Crucible a man named John Proctor stood up to the law and theocracy yet held on to his honesty, integrity, and beliefs even in the face of death.

Salem in 1692 was a theocracy and held God above all else but when someone believes in something so much they lose the facts along the way. Getting caught up in the fear of the witchcraft, the town of Salem begins to search for all those who have signed the black book and gone to the devil. When Elizabeth Proctor is accused of signing the black book, John Proctor sees that the town was falling for Abigail William’s lies. Abigail originally accused Tituba, saying that she was a witch and that she made Abigail Williams, Mary Warren, Betty Parris, Mercy Lewis, and Susanna Wolcott sign the black book. When Betty Parris then fell ill the accusations start coming from everywhere. John Proctor talks to Mary Warren and tries to get her to tell the truth to the people of Salem. He asked that they admit there was no witch craft and that they made it all up. As the hearing between Mary Warren and Abigail Williams began, Abigail started to pull Mary back to her side and get her to doubt herself as well as John Proctor. She did this to make her believe it was real and that the real liar was John Proctor. Proctor becoming furious says “A fire, a fire is burning! I hear the boot of Lucifer, I see his filthy face! And it is my face, and yours, Danforth! For them that quail to bring men out of ignorance, as I have quailed, and as you quail now when you know in all your black hearts that this be fraud-God damns our kind especially, and we will burn, we will burn together,” (Miller 3:111). The Deputy Governor Danforth turns to Abigail, she said that because Proctor lied then he must be with the devil. This was when John Proctor stood up for himself and ended up in jail.

John Proctor remained true to himself as he was tortured until his final day. On his last day he saw his pregnant wife for the first time since they had both been imprisoned. When Elizabeth asks him to lie and confess he said “I cannot mount the gibbet like a saint. It is a fraud. I am not that man. My honesty is broke, Elizabeth; I am no good man. Nothing’s spoiled by giving them this lie that was not rotten long before,” (Miller 4:126). Basically he was saying that he would not lie because if he did then he was a liar and he could not live like that. But after talking to Elizabeth he agrees to lie and confess thus he would be there for her and protect their children. As he confesses he is asked to betray those he saw when he signed the black book and his reply was “I speak my own sins; I cannot judge another. I have no tongue for it,” (Miller 4:131). This causes the Deputy Governor Danforth and Reverend Paris to become annoyed. Still he continued to fight refusing to acknowledge others and growing weary of lying which did not make him happy. When asked to sign the ledger for the last time, John Proctor shows just how strong he really was.

John Proctor though believing in God and the church he finally stood up for himself as well as those around him. After a confession was said it was written word for word and then the man or woman accused must sign it and have it hung with the others on the church wall and when John Proctor is told this he holds his ground and shows amazing strength saying “You came to save my soul, did you not? Here! I have confessed myself; it is enough. I have confessed myself! Is there no good penitence but it be public? God does not need my name nailed upon the church! God sees my name; God knows how black my sins are! It is enough,” (Miller 4:132)! Knowing that he had lied was enough he did not want it displayed in public. As the argument continues one of the men says that if he did not hang the confession on the wall then he would hang himself. He turns to his wife and tells her goodbye and rips up the false confession stating that he would rather die an honest man then to live as a liar. Then he was brought out to his death and is hung an honest man.
Growing up in a theocracy can be hard, the only way to make a stand against theocracy is to hold on to the beliefs and values and know that God is forgiving even if man is not. John Proctor died for his beliefs in The Crucible and his family will always remember him for being strong and standing up for what he believed in. Knowing the law was wrong and not faulting on his belief of honest he died but with him died the ludicrous idea of witchcraft. Knowing that his wife was pregnant and sentenced to die after birthing the child along with the other Proctor children would be alone after Elizabeth died, and yet he refused to have his lie be posted for all to see on the church’s wall. Perhaps he was afraid of what God would say if he but his perjury on the church’s wall. In the end he stood true not to the way of the law but to the way of God and remained true. John Proctor is an admirable applicant to stand up against the theocracy of Salem.
? 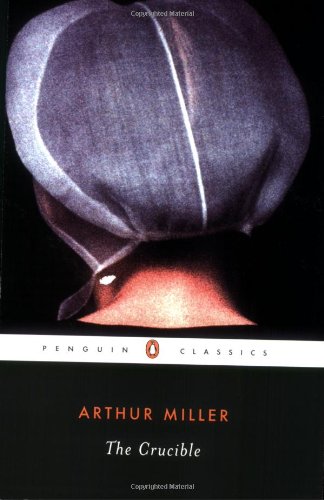 
Buy from Amazon
The author's comments:
This is about the Crucible and how I took the character John Proctor.
Post a comment
Submit your own