At the moment, the movie adaptation of this book has yet to materialize. I can tell you now that the movie will not be as good as the book. This is not to say that the movie won't be worth watching--I myself have every intention of hitting the theaters as soon as I possibly can--but the book is a work that cannot be replicated on the screen. The subtitle, "An Oral History of the Zombie War," is quite appropriate. The book is divided into sections that chronologically detail the pandemic, the "Great Panic," the war, and the world after the smoke clears. Within these chapters are dozens of "interviews" of survivors which detail individual aspects of the global zombie ordeal. Some accounts simply detail events, others are short biographies, some detail particular aspects of how people reacted, for better and for worse. In sum, World War Z is a literary experience that cinema will not be able to accurately capture. Now if you will allow me, I will explain in more detail why you ought to be interested in reading this unique novel.

Since we were on the subject of movies, you may recall the 2011 film Contagion, which provided us with a chilling prediction of the disaster that would ensue were the United States ever to face a real, deadly pandemic. World War Z bears some similarity to this well-known film. In it, Brooks outlines with frightening clarity and a fundamental understanding of society, politics, and the human mind, just what could, and probably would, happen in the event of the so-called zombie apocalypse. What makes this work of fiction so important is that the zombie idea, generally considered rather silly, actually encompasses a wide range of potential global disasters. Like Contagion, there is the multifaceted issue of a pandemic disease. The use of the term "World War Z" suggests the way that the zombies function as an enemy invasion, causing great military difficulty. Some of the interviews mention how government flaws and mismanagement cause chaos to descend when panicked people turn on the authorities who were supposed to protect them. The breakdown of supply chains and trade, technological dependence, postindustrial impotence in face of physical danger, and the ever-present problem of misinformation and mass panic, which can arise for many reasons, are all perfectly realistic concerns that Max Brooks touches on through the medium of describing a scenario that would otherwise be considered completely ridiculous.

World War Z doesn't just teach us about the chinks in the armor of our countries and societies. It teaches us about the weaknesses each and every one of us possesses. One of the interviews describes the massive traffic jams as terrified people form a herd mentality and blindly begin to follow others as they rush to drive away, as far away from their fears as possible, even though the roads only lead to more danger and death. People go insane in ways that I never would have predicted, but ways that are not really outside the realm of possibility when one thinks about it. There are also times when the book glorifies the strengths that people harbor, their fierce drive to survive. There are even several accounts in which forms of insanity are actually the defence mechanism that allows certain individuals to survive. This is no cheesy horror story; this is a spot-on and revealing psychological examination of the human fear response. The zombies, really, are merely the way Brooks gets your attention.

Now, to be fair, this is still a zombie book. Lots of heads are blown off and smashed in. There are quite graphic descriptions of violence, death, decay, and walking corpses. For some people, this would be considered a plus. Personally, I'm rather ambivalent on the subject of gore. I can deal with it, but I'm not excited by it. Some people are completely repulsed by it. I happen to have a friend that I know without a doubt would be unable to get past the first twenty pages for the blood and entrails. Even parts that do not contain gory details can include very disturbing material, particularly accounts of the less inspiring ways in which people reacted to the zombie threat and its results. Reports of government and military failures may be a bit too close for comfort, as some of them come across as not entirely unlikely. At the end of the day, the important thing to remember is that this book falls neatly into the Horror genre, and any potential readers need to be aware of how much horror they can handle.

Similar works in print and film: I Am Legend, Walking Dead, Contagion, The Passage 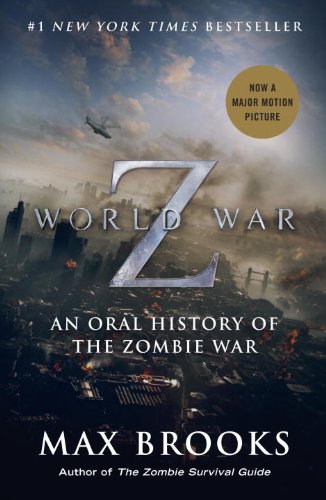 
Buy from Amazon
The author's comments:
This is the first of a series of reviews of the books on my "Books Everybody Needs to Read" (BENTR) list. Obviously this is a matter of opinion, and you should expect some bias. However, the reviews are also intended to serve as reasonable stand-alone commentaries on the books in question. Whether you agree with my assessments of value or not, I hope this review is helpful to you.
Post a comment
Submit your own