Struck By Lightning: The Carson Phillips Journal by Chris Colfer

Favorite Quote:
Don't break character, you've got a lot of heart. ~ The Killers

Most of us know what it’s like being the underdog in school. We can’t all be on the top of the social pyramid. We can’t all have Justin Beiber hair or Taylor Lautner abs. What we can have is endless power to make our own world where we can be anyone we want. One person who exercises this power is Carson Phillips, in Chris Colfer’s new book, ‘Struck By Lightning.’ (2012)

In the story, Carson Phillips lives in a small town in the middle of nowhere. His dreams are bigger than the town itself. He wants to be the editor of the New Yorker. He believes his first step in achieving that dream is to major in journalism at Northwestern University. In order to be accepted to his dream college, he must turn in a literary magazine full of articles from both him and his peers. Unfortunately, his classmates don’t jump at the opportunity. So, Carson resorts to blackmail. He begins withholding the overwhelming secrets of his classmates in order to get them to enter articles to his literary magazine. Little does he know, this can be a dangerous business.

This young adult’s book is one that will be remembered for ages after being published in 2012. Authors hardly ever capture high school accurately in their writing, but in ‘Struck By Lightning’ Chris Colfer nails it. These days, high school related books are all about falling for the captain of the football team even though he’s dating the evil lead cheerleader. In Struck By Lightning, Carson actually goes to class and has realistic enemies. If there were two words that could capture Struck By Lightning: Carson Phillips Journal they would be: Painfully True.
This book is now a film (Also written by Chris Colfer). In fact, the film was written before the book.But like most of you, I prefer the book to the movie. 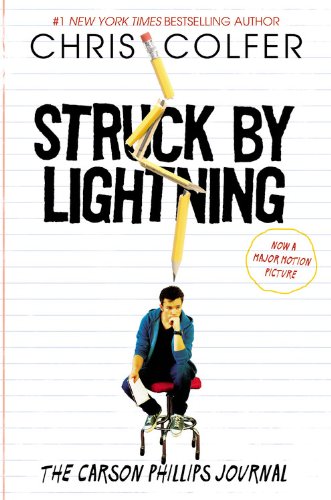