And she came back again. Black Orchid is a story about violence and violent deaths and the hope in rebirth, in the strange and intertwined lives of a woman who transcends the biological and expresses the natural of life and growth. Susan Linden, was a beautiful young woman, the victim of a life of domestic abuse from those she loved and were supposed to love her, including her father, and later her killer, her ex-husband. Later she is reincarnated as Black Orchid, a mysterious vigilante superhero, who is killed again in the flames of vicious carnage. Neil Gaiman and Dave McKean take the readers on an unexpected treck when the protagonist who was offed in the first act, is yet again reborn from the ashes, and revived from the remains of her DNA by a kind plant-lover and companion from a past life. Throughout the graphic novel, several villains track the same mysterious target, which is neither fully plant nor fully woman, yet still seeking something she doesn’t even know.

In general, people get bored from the same formula that often defines the comic-book industry, tired of the invincible heroes who always manage to escape safely and happily from the evil-doer’s clutches. But for anyone who reads Black Orchid, will find that this is not one of those times. Dave McKean’s imaginative styles range from inky noir, to the vibrant colors of the Rainforest, while artistically matching Neil Gaiman’s dark atmospheres and wide range of characters perfectly in every panel. Though the book contains references to classic comic-book characters, like Lex Luther, Poison Ivy, and Batman, Black Orchid, like Sandman, reads as a unique individual piece. It divergs from the expected by making a satirical note on the excessive use of violence in comic-book genres, with a scene that reveals the author’s awareness of such clichés, when one of the antagonists talks about killing the heroine, and actually does it, leaving no chance of that perfect Happily Ever After.
Neil Gaiman, one of Vertigo’s best writers, along with follow collaborating artist, Dave McKean, create a story that reminds fans of their critically acclaimed series, Sandman, while creating a new legacy from Black Orchid. While Black Orchid may come off as a disturbing shock to first time readers of Neil Gaiman, Black Orchid is strangely compelling and beautiful, at times sweetly scented like an exotic flower, yet bittersweet like the smell of ripped petals. For those who are open-minded and appreciate the darker realities of life facing them in fiction, Black Orchid is a fascinating read. 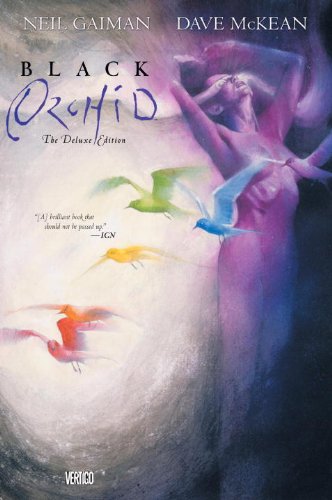