Nausicaä of the Valley of the Wind by Hayao Miyazaki

For those who know of the legendary storytelling of Hayao Miyasaki, one of the world’s greatest animation directors, Nausicaä of the Valley of the Wind, is another one of Miyazaki’s best, channeling into another medium of art, manga. Nausicaä is the story of a post- apocalyptic world in which the consequences of an industrial overloaded society create a toxic environment of poisonous air and mutant creatures. Only a few kingdoms are left standing on the last dwindling non-lethal lands, and in one of them is Nausicaä, the young princess of the Valley of the Wind. Suddenly Nausicaä finds her land engulfed by war between Ohmu, giant shelled insects, and other empires, such as Tolmekia, fighting for control of precious resources while her kingdom barely remains alive from the continual spreading of the Sea of Corruption, a deadly and beautiful forest whose constant peripheral contamination turns bodies to stone. Manga creator and artist Hayao Miyazaki manages to capture the spirit of flight in Nausicaä using detailed pencil sketches to bring to live characters and evocative landscapes and action scenes. Nausicaä of the Valley of the Wind may be one of the best graphic novel series to be ever produced in Japan, with highly developed plotlines incorporating themes of environmentalism, flight, and feminism, and complex characterization that defies gender stereotypes with non-clichéd antagonists. Moreover, Nausicaä embodies the best of Miyazaki’s strong-willed heroines, unusual for traditional Japanese culture and manga, as a brave young woman capable of intense anger and intense empathy with living creatures, as well as the ability to fly like the wind. Nausicaä Valley of the Wind Volume 1 is a must-read for fans who appreciate Hayao Miyazaki, or just anyone great artwork and rich storytelling. 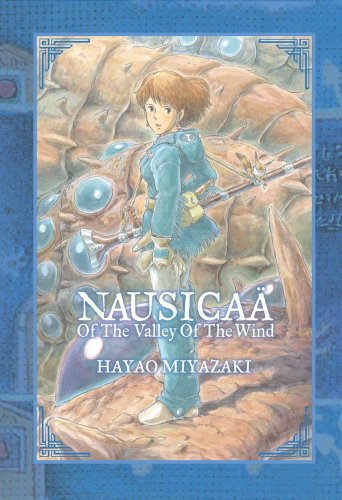