House of Hades by Rick Riordan

For a very long year, Percy Jackson fans waited impatiently for the next book in the Heroes of Olympus series, written by Rick Riordan. Finally, on October 8th, they rushed to the bookstore to purchase a brand new copy of House of Hades. As one of these fans, I have to say I was slightly disappointed. While Rick Riordan is talented with character development and keeping the reader's interest, his solutions can often be unsatisfying.

Most readers who read Rick Riordan's books are enthralled by the vivid characters, who become real through Rick's storytelling. After reading each book of Rick's, I feel like I know the characters even better and therefore become more attached to them. Rick has a way of making his readers fall in love with the characters and view them as close friends. He gives them interesting personalities that show through their interaction with other characters and reactions to circumstances. I think the characters in House of Hades are very well developed and they have become some of my favorite characters in all the books I have read.

Another thing Rick Riordan has talent for is keeping his readers hooked on the story. I was so glued to the story line in House of Hades that I finished it the day after I bought it. This is partially due to my attachment to the characters. Since I cared about the characters, I wanted to know what would happen to them and how they would get out of their situation. The storyline also draws readers in with the suspense of prophecies and visions. Rick gives readers a quick peek into something that will happen later in the book, and they just have to keep reading to find out how the characters get into the situation, and, more importantly, how they will get out. House of Hades is difficult to put down because Rick makes sure the reader is just dying to know what happens.

House of Hades had a great setup for a fantastic ending, but I was disappointed. There were some cool things about the ending that I thoroughly enjoyed, but I expected much more. Rick is so good at building suspense using prophecies and visions, that the readers come to expect a huge ending with a lot of dreadful and wonderful things. In House of Hades, Rick made his readers expect that a main character would have to sacrifice themself to close the doors of death, but he did not follow through with it. Rather than giving the reader more than they expected, he gave them much less than they expected.

Perhaps Rick Riordan's readers were expecting too much because of the excitement of his previous book, Mark of Athena, or maybe he is planning a big finale' with his last book in the Heroes of Olympus series, The Blood of Olympus. Whatever the reason is for the rather weak ending to House of Hades, I would suggest this book to Percy Jackson fans, but with a warning to read without expecting as much fulfillment as Mark of Athena and the rest of the series. 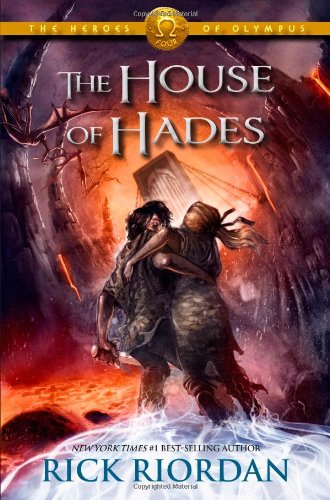