The nightmare began with the death of their daughter. It intensified when they entered the house.

Jack and his wife Stephanie are going to a marriage counselor when they get lost in the 'hicks' of Alabama. Things are tense enough. Stephanie seems to be criticizing EVERYTHING Jack says and does, Jack silently defending himself. Dusk settles, and they stumble into a road trap. They take shelter in an old house with two other travelers, Randy and Leslie, and the inbred owners of the house, Stewart, Betty, and their grown son, Pete.
After a particularly intense dinner, the visitors decide to leave. No sooner do they get to the door, then they encounter the 'Tin man', Barsidious White, and are thrown into his game.

The playing field: The ultimate haunted house.
The goal: Get out alive.
The basic rules (as written by Barsidious White):
1. I killed God in this house.
2. I will kill everyone in this house, like I killed God.
3. Give me one dead body, and I might let rule #2 slide.

You have until dawn.


The good stuff:
This is an awesome story of good vs. evil, quite literally. Jack offers himself as the required corpse, and refuses to kill another 'player'. Characters sacrifice nearly all they have to protect each other. The characters are very relate-able, and the writing style keeps the pages turning.


The bad stuff:
Obviously, this book is rather violent. Characters drown, are shot and stabbed, not to mention the whole objective of the game.
This book is not for the squeamish.
There is mentioning of cursing, and someone suggests that two people are going to have sex (it never happens). A character confesses to being a whore, and mentions that she was raped as a child.
Pete wants one of the ladies to be his wife.
Stephanie often gets on the others' nerves (and mine).

Frank Peretti novels are just about the only horror novels I read, but even so, this was pretty extreme.
I liked it, but it only really makes sense when you get to the end.

Just be aware: This house could be yours 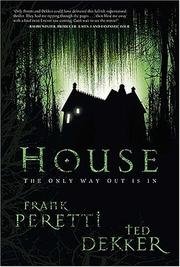