Attack on Titan by Christian Capers

React on Titan
So! I have just finished Attack on Titan. Well, okay, I finished all twenty-five episodes of the anime. And boy was it a commitment.
I had attempted to watch one through five in the traditional, Japanese language with English subtitles. The rest I watched in English dub, which was not all that bad, considering I was told that nothing in anime sounds good in English. This is actually not true, because a lot of anime does the dubbing right without making it sound like a robotic pre-school after school special. A lot of the time, it seems as though the Japanese to English translators used Google Translate to translate, but I’m thinking they understand the gist of the raw translation and choose to use creative license. The only problem I had is that the characters tended to use huge words in small amounts of time, but beggars can’t be choosers. If I had it my way, I would have watched the whole thing in Japanese, since the voices are easier to listen to and the actors are way intense, but que sera sera. That and my phone wouldn’t even load the subbed episodes. Stupid piece of junk.
Anyway, enough about dubs and subs and blub-blub-blubs. You should have seen me when I was watching that epicness on my tiny little smudged phone screen for five hours straight while my mom was doing my hair. I can now understand why they make reaction videos. The rest of my family glanced at my ooh-ah expressions, but I don’t think they asked what I was watching because I think they might be a little scared of Attack on Titan. Which is understandable.
I feel so accomplished that I finished twenty-five episodes in three days. I watched the first four episodes on Friday night, which is the most charged time of the week anyway. The feels got so intense for me that anytime something pure or cool or awesome happened, I’d pause the video, turn on a Britney song and dance the energy away. (Not even kidding—oldies, like Born to Make You Happy or Sometimes or Oops I Did It Again—anything to burn off the excitement ?)
Originally, I was going to wait until after I’d read the entire fourteen-volume manga, but I just couldn’t wait any longer, considering I couldn’t even get my cold, anime-deprived little paws on the manga except for online. Reading manga online is not as easy as you would expect, believe me. First of all, the ads—the foolish ads—kept popping out of nowhere. Then, I couldn’t even quirk and fiddle around with the keyboard without the thing skipping two pages ahead (Spoiler alert! Did I forget to tell you that? Uh, yes you did!). Besides, since my laptop went kaput months ago, I’ve been having to use my dad’s and how am I supposed to finish a square with him popping in and out every two seconds, asking me to get out before I infect his computer with a virus?
Anway, anime time. While the people were attacking, I was reacting—for sure. Even though I’d read all but the last three graphic novels, and I knew what was going to happen, seeing it actually being played out with the characters living, breathing, surviving, thriving, dying, crying, panting, sweating, gasping, falling, not to mention being colored in—was a shock. It was a good shock. Matter of fact, my sister kept asking me to shut it because I kept reacting out loud. In hindsight, it was the funniest thing.
“Oooooooooooooh.”
“No, no, no, no, no, no, no, no!”
“Yes. Yes! YEEEEEEEES!”
“Don’t do it. Don’t. Don’t. D—you did.”
“Awww, don’t cry, my little baby.”
“Why are you crying right now? Is it to make anyone feel sorry for you?”
“Oh, no you don’t. You guys see what he’s trying to do? He thinks he’s so smart.”
“Why doesn’t anyone ever listen to him? He’s the smartest one there!”
So contradictory, right? That’s what anime does to me! Good thing I couldn’t hear myself—earbuds are a wonderful invention. Even though I flap my jaw when I’m in the guest room by myself watching an old Disney video, I’ve never jabbered as much as I did watching Attack on Titan. Or reading it either.
And as for the finale. No spoilers coming, trust me. I can’t stand people who spoil things. I should fine them and use the money to pay for an account on Funimation. Then I wouldn’t have to go through these anime withdrawal periods…
Anyway. I was told that I was going to cry, but my crying is more often than not self-induced for me. I rarely cry at things, but the emotions I felt were much stronger. Shaky—I mean, the finale was powerful. And lost. They promised me answers and now I have more questions than ever that won’t even be answered until next summer (2015). I feel so duped, but then again, I did notice that they couldn’t possibly cram that many chapters into twenty five episodes.
If only I could sit and have a chat with Hajime Isayama (Or is it Isayama Hajime? I have no idea). We could drink dacquiris in outdoor cafés and I could hit him with my rapid-fire questions. Yeah, we might be there a while.
Overall, if you haven’t seen this show, you should watch it now, unless you’re a sissy. Seriously, though. If you look past all the blood and gore and killing and death and destruction, the story is amazing, the characters are amazing…you should watch it. Because you’re gonna have a very strong reaction, and then the plot twists, and then the feels, and then you’re gonna hate everyone and then you’re gonna love everyone and then everyone’s gonna die once you start loving everyone!
Go watch Attack on Titan right now. Subbed, if possible. And if you can’t, then oh well. 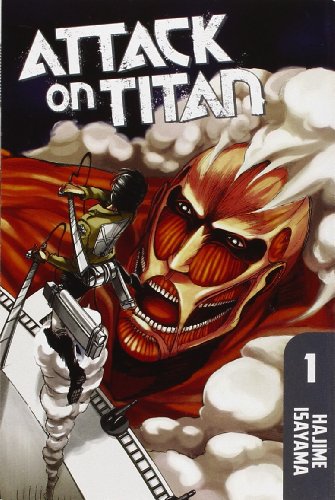