Diary of a Wimpy Kid: The Long Haul by Jeff Kinney | Teen Ink

Diary of a Wimpy Kid: The Long Haul by Jeff Kinney

We all know who Greg Heffley is. His diary - I mean journal - is read by millions of children around the world. We all know what sort of person he is; egotistical, yet somehow loveable. Greg's comical behaviour and crazy plans always seem to get him and his best friend, Rowley, in trouble.

The plot is somewhat different in The Long Haul. Firstly, there is almost no mention of Rowley, which is different from the other books. It's probably good news for Rowley because he won't be the victim of Greg's plans this time.

Summer vacations have begun, and Greg Heffley has to spend them with his family. Greg's idea of the perfect summer contradicts that of his mother Susan Heffley, who thinks summer is the time for family to be together, and plans a road trip.

I won't ruin the book for you, but one thing had been made clear from page 2: not all of Susan's 'family-time' plans have worked out, especially when it comes to vacationing. It is only inevitable that something goes wrong, which lead to a series of weird and hilarious events.

The book is interesting, and the plot is slightly different than the other books.  The time period of 'The Long Haul' and 'Dog Days' is almost the same, which means the plot should be somewhat similar (beaches, pools, ice-creams). But 'The Long Haul' seems more elaborated and a 'happening' summer compared to the previous one, with more adventure and excitement.

The cover is a bright orange, featuring the Heffley's minivan, and Greg crammed by all the luggage at the back. One look at the cover could give you the basic outline of the entire story - road trip disaster. It even includes two bonus bag tags, and a list of games you could play on your road trip.

I really liked this book, but I do think it's getting different. Every time a new book comes out, there is something that makes it stand out from the others in the series, which can be both good and bad. In this case, it is made clear that Greg is growing up, his way of writing changes slightly, and more and more words have been capitalised for emphasis (which has been done before, but not like this). The adventure is there, so is the thrill, but something is missing. Perhaps Greg's charm. Because for some reason, I would always prefer the first few books over the last ones. 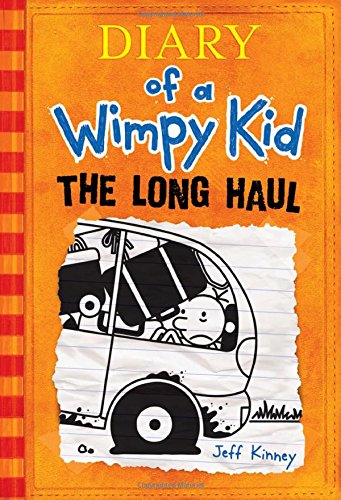 I have been reading Wimpy Kid books for five years now, waited a year for the next book to come out, and was the first one in my class to get my hands on the new book. The books came out in different eras of my life, so now when I look at them I say," Oh I was in seventh grade when Cabin Fever came out!" or "Hard Luck was released in nineth grade!". It was the same this year; I was the only one in class who had bought The Long Haul a week after it came out, but girls from my class seemed to have moved on from 'childish books' like Wimpy Kid and now read 'mushy, romantic, vampire-slaying' types instead.